It wasn’t long after noon yesterday (Saturday), when Ohio State and Michigan were trading hay-makers in the Big House that surely made Woody and Bo cringe, that I had a premonition, that I thought of that Thanksgiving Friday from yesteryear, November 29, 1984, when arguably the most exciting college pigskin encounter — until yesterday — was played.

The Hail Flutie game featured Bernie Kosar and the diminutive flinger Dough Flutie firing it all over the field. Lots of scoring, lead changes and Brent Musburger and Ara Parseghian in the booth to call the ebb and flow.

Not long after that one kicked off and BC grabbed an improbable 14-0 lead, I called my co-worker Scott, who, more professional than me, chose to go into the office that day. “Get to a TV,” I implored, “this is going to be one of the best ever.”

What the Wolverines and Buckeyes were doing, with national title implications and a possible Big Ten title on the line, not to mention a year’s worth of bragging rights in the second most intense college pigskin rivalry, was a harbinger, I was so very sure.

If only I knew.

Fortunately, nice late autumn, holiday weekend weather be damned, I was tethered to my Ekornes lumbar-enhanced lounge chair, clicker in hand and enough treats and beverages in stock for the duration.

It’s not like we shouldn’t have seen it coming, football fans.

Thanksgiving Day’s Egg Bowl gave us a hint of what was ahead of us. Even though the game was of little concern to anybody, other than denizens of the Magnolia State, and fellows with a belly full of oyster & andouille dressing ,who tired easily of trying to teach their nieces and nephews to play Monopoly in the living room after the feast.

Cowbell State kicked a field goal late in the 4th to send the game to OT. Then beat rival Ole Miss in the first extra period on a three yard Dak Prescott run.

If that game in Jackson was the equivalent of pigskln hors d’oeuvres, Friday was the appetizer course for Saturday.

Central Florida did what it has been doing all season. Dallying with defeat, then coming back late to salvage a very late W. This time it was against “rival” South Florida. Blake Bortles hit Breshad Perriman with a 50+ yard strike that whipped the Bulls, 23-20. 1

I know, football fans, I’m still on Friday’s games. Just trying to educate those of you who might have missed them because of Light Up XXXXXville (Insert your town’s name), some silly ol’ baskeball game, or a trip to the cineplex with PePaw, Aunt Martha and cousin Louise to see “Hunger Games.” 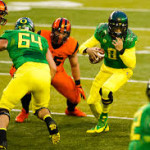 Okay, back to Friday night. When there was the Civil War between reeling Oregon and under-achieving Oregon State, which competitors were wearing the most cartoonish, don’t adjust your sets, neon uniforms ever donned by competitors in the same game. Beavers were in day glow Orange, while the Quack wore bright green and iridescent yellow.

And the game was more exciting than the moment when your four year old asked, “Daddy, who are those cartoon characters you’re watching?”

If only we knew when our pigskin toxic heads hit the pillow Friday that those barnburners were only a prelude. 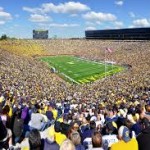 Here’s how the first quarter played out in Ann Arbor.

Braxton Miller overland from 53 yards for the score with :55 on the clock in the quarter. Buckeyes 14, Blue 14.

It was somewhere during that interlude that I said to myself, “This is going to be be a special game.” I also tried to fathom what it was like at that moment where long time heated rivals, but close friends, Woody Hayes and Bo Schembechler were watching the game in the great film room in the sky.

Woody: “Gaaaaaaaaaaaaaaaaawd damnit, Bo, how in the hell are we supposed to catch that pipsqueak quarterback.”

Bo: “Geeeeeeeeeeeeesus chris, Woody, that Meyer guy has his receivers spread all the way across the damn field. What the hell has happened to our game?”

Anyway, the Wolverines went up by 7 again, soon to be matched by the Buckeyes. In the 3d quarter, undefeated, significantly favored Ohio State went up 7, then 14. 3 Improbably, the home team knotted it with TDs at 11:15 and 5:01 of the final quarter.

With just 2:20 left, Ohio State took a 42-35 lead. Which obviously wasn’t as safe as they figured. Michigan drove the field, pulling within one on a Gardner to Devin Fuchness toss with :32 left in regulation.

Then came Brady Hoke’s reasonable decision. Figuring his then 7-4 Wolverines would never be able to match the undefeated Buckeyes score for score in OT, and figuring a W over Ohio State would trump anything else the season might have in store, the Michigan coach went for two and the W. Ohio State intercepted the pass, to stay undefeated for the season and in the BCS title hunt. 4

As we know, that Big Ten thriller was not the most exciting football moment du jour. Not even close, actually.

For Duke fans, that was the final gun of its W over rival North Carolina. Blue Devil’s first ten win season ever. Spot in ACC title game, where it shall be drawn and quartered by Florida State.

For Missouri fans, it was the final gun of its W over the Texas Aggies. After going 5-7 last season, its first in the SEC, the Tigers were going to play Alabama, oops, Auburn for the SEC crown this coming weekend in Hot ‘Lanta.

For Penn State fans, it was the final gun of its upset over Wisconsin in Madison, securing a winning season.

For UCLA fans, it was the final gun of a decisive smackdown of Southern Cal, their second W in a row in this crosstown rivalry.

For Georgia fans, it was the double OT victory over rival Georgia Tech, in a game that provided some salvation for a disappointing season that began with high hopes.

Which brings us, as you knew it inevitably would, to the “Mother of All Iron Bowls,” Auburn’s unfuckingbelievable, last second, 109 yard victory over Alabama.

Most heated rivalry in college football.

Both teams in the Top Five.

Okay, I’ll give you the quickest of recaps. You want more detail, it can be found all over the www.

Underdog Auburn goes up a TD in the first.

The Crimson Tide scores 21 straight in the second. The Tigers tally late and are down, 14-21 at halftime. They knot it with a TD in the third, but fall behind again on a Bama touchdown with 10:28 left. Auburn ties the battle royale with :32 to play on a cunning Nick Marshall to Sammie Coates toss and run.

Uh, no overtime. As everybody who ever ate a bratwurst knows, Nick Saban effectively argued for a second to be put on the clock. Which it was.

Roll Tide coach Nick Saban, a fellow who knows how to win, which he has done a lot at various schools, and win national titles, which he has done at different schools, decided to attempt a 57 yard FG, inserting kicker Adam Griffith, not Cade Foster, who had already missed three earlier in the day.

Of course, I immediately heard from my nemesis David, who opined ad nauseum that it was the worst decision made since Custer at Little Big Horn. I’m not sure what excuse I finally used to get him off the phone, but it worked. The texts nonetheless continued through the evening.

As a football fanatic, as a fan who roots for the underdog when my team’s not involved, I’m glad Auburn won. So, I’m glad Saban made the decision. Because it set the stage for that momentous, improbable, almost impossible to believe finish, after which the folks in the Loveliest Little Town on the Plains are still toilet paper tossing and world of sport is still buzzing.