My inclination is, of course, such is my nature, to start with a personal lament.

But, that must wait. At least for a paragraph.

For it would be inhumane not to dutifully express heartfelt sadness that it shall be weeks before all the scarlet and gray-clad remains are dredged from the depths of the Olentangy River. Which body of water runs through the campus of The Ohio State University, where flags are flying half staff.

There are murmurs that classes for the rest of the school year might be suspended. No word yet from school officials. Though I’m advised dorms are already emptying out.

My favorite barb about the Buckeyes’ demise came from the pen of Eric Crawford. Under a photo of a forlorn Urban Meyer, eating a slice of Papa J’s while sitting on a golf cart at Lucas Oil in the aftermath of his first L at The Ohio State U., Crawford wrote: Bitter ingredients. Bitter Pizza. 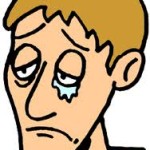 My personal distraughtivitude emanates from the reality that I finished my season of prognostications with two losing records in a row, the only two negative weekend tallies of the year.

Northern Illinois, Mizzou, and the aforementioned Ohio State University, The all lost when I figured they’d prevail. Sigh. But, Stanford won in Arizona, and Florida State took care of business, bashing the Blue Devils.

Even without factoring in point spreads, for which omission I’ve received more than a rasher of shit from several readers, that’s not bad at all.

Say goodbye to The Prince of Prognosteration who shall return next season. Unless, of course, he tackles the upcoming bowl slate, in which case he’ll be back with you forthwith. 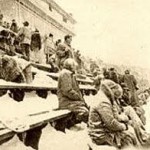 Of all the gridiron excitement this weekend, one game stands out as most entertaining. And, no, it wasn’t that Game Boy videoriffic SEC title contest.

I’m talking about Eagles vs Lions in that snow storm in Philly. Not sure why, but games in massive inclemency are just too much fun to watch. Even if one’s favorite NFL team loses.

Truth is, among the pro games played so far today, the end of Vikings/ Ravens was one for the ages. As if they were trying to outdo, I dunno, Auburn and Mizzou.

The actual bowl lineup won’t be official until tonight when The World Wide Leader puts its imprimatur on the matchups. Which hasn’t stopped wags nationwide from projecting.

What irks me, and should also bother you, is that the blazers that choose the participants beyond those locked in could care less about the games. Tickets sold, hotel rooms filled  — those are considerations #1 and #2.

So, instead of an intriguing Crimson Tide vs Quack encounter in the Sugar Bowl, we’ll probably get Bama vs. Boomer Sooner. Because, well, see paragraph above.

Among the more intriguing battles being projected: Okie State vs. Mizzou in the Cotton Bowl. Texas Tech vs. Arizona State in the Holiday Bowl. Rutgers vs. Notre Dame in the Pinstripe Bowl.1 Fresno State vs. Southern Cal in the Las Vegas Bowl. And, Louisville vs. Miami (Fla) in the Clint Hurtt Russell Athletic Bowl.

All this is obviously subject to change, pending the reveal of the actual lineup of games that will be played.

The proverbial handwriting was on the proverbial wailing wall. Big conference football is all that’s going to matter from here on out.

The only question left is whether Petersen will do his Dan Hawkins impersonation when he’s roaming the sidelines for the Huskies. Hawkins, if you recall, was the originator of the Boise State hysteria.

He jumped to Colorado. Never to be heard from again. Winning 90% of one’s games in the MWAC is one thing. Competing in the PAC 12 is another.

I wish him well, but the Brad Stevens of college pigskin needs to prove he can be as successful when playing the big boys every week.

I’m sure I’ll have more soon.

But, before I go for now, I want to say how honored I am by the actions of the U of L football community.

Yesterday I got a phone call from Charlie Strong. You’d think he’d be really busy. So, for him to take the time to call me is just really a blessing.

Then today, the phone rings and it’s Teddy Bridgewater on the line. What have I done to deserve this, I’m wondering?