Given that I possess the attention span of a house fly (musca domestica) flitting about a porch bulb in August, I love the McNuggets of McNews that now come in my morning paper.

So, I pass along with my favorite from this a.m.

Despite those two championship appearances, this looks to my undiscerning eyes like Jeff Walz’s best squad.

But, until he can recruit some big uns, the Cardinals shall remain wannabes as legit title contenders.

Two things remain elusive, uncertain as we wend our way to those magical days ahead, known as Championship Week and March Madness.

1. The whereabouts of Viktor Yanukovych? 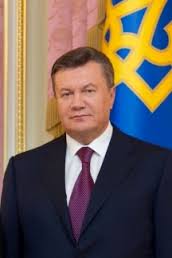 Wonder if the now missing in action Ukrainian prexy shall surface before our favorite Monday in April?

If heralded hoops computer analyst/ guru Ken Pomeroy is correct, it will be a most fascinating March. In his daily updated standings this morning, he has Arizona topping the list.

Standing next are the surging Louisville Cardinals.1

In the unlikely event those two squads do meet in the JerryDome before Jim Nantz, Greg Anthony, Steve Kerr and Hoopsylvanians everywhere, it would provide an eery symmetry to the days of yesteryore.

Recall when The Rick was coaching that other school in the Commonwealth, the one where now they only take his name in vain, he led the team to the national semis one season, to the title the next, and to the championship the following season, where UK was upended by Arizona.

That kind of border line Twilight Zone rumination is what fuels us here in the Land o’ Hoops with Son of Polar Vector on the way later this week.

I’m not sure what to make of the exultation that permeated UK’s players, after they squeaked by NIT-bound, 16-10 LSU by a wafer thin digit in OT Saturday @ Rupp?

My first thought was that the exhilaration expressed, despite the fact that it was another underwhelming Wildcat performance, might prove a catalyst for better things to come. You never know what’s going to get a team on track.2

On the other hand, my man Sportsbee opined, “They celebrated like they’d just won the NCAA, when they should have beaten LSU by forty points.”

How it’s going to play out for this year’s quixotic Cats is but one of college hoops fascinating story lines.

In late season standings that makes NFL parity look a joke, check out the SEC.

Florida, Kentucky and Georgia — yes, Georgia — are the only schools with winning league records. Alabama, Auburn, Mississippi State and South Carolina — where fans are already lining up for spring football practice — bring up the rear with losing conference W/Ls.

As for the other league we’re following in these parts, the AAC remains a land divided, SMU’s wobbly performances notwithstanding.

Larry Brown’s Mustangs won @ Gampel yesterday, never trailing in the tilt. But last week lost at bottom feeder Temple, which question mark performance matched that of their 71-78 L earlier in the conference campaign to South Florida.

Those two setbacks, along with UConn’s loss at Houston, are the only games the league’s top 5 have not won against the woeful bottom 5.

Then we can see how they react tomorrow night @ Bradley, in a game televised by The World Wide leader.

I know, you could care less.

Hockey aside: Did the U.S. team not want to play Finland for the Bronze or what?

Do I need to talk about Jim Boeheim’s meltdown, which cost his team any chance of beating Duke?

Do I need to mention how Jay Bilas, with is usual empirical analysis of the situation, actually chastened chatterbox Dickie V?

Should I compare the reaction to that when Mike Davis went ballistic during an IU/ UK game years ago?

Okay, I’ll admit, while surfing the channels last night, I lingered long enough to watch two guys run the 40 yard dash at the NFL combine. To hear the announcers breathlessly distinguish betwee a fellow dashing a 4.68 and one covering the distance at 4.61.

At which point, some sanity reigned.

I advised myself to click off the telly and go to bed.

I remain of the opinion that Jim Beilein, as he was when his West Virginia team couldn’t hold onto a W in the regional final against U of L last decade, wasn’t ready to win the title last season at Michigan.

But, after considering what the Wolverines did to the Spartans yesterday, as well as his full resume, the fellow might very well be an offensive genius. Plus his teams play pretty solid D without fouling a lot.

Despite a number of big personnel losses, the maize and blue are back atop the Big Ten standings, and appear legit.

Today’s Dark Horse to watch: Same as the last time.

Sayonara Sochi, a place we shan’t think of again, a word we won’t utter again.