A couple of final observations about Louisville’s smackdown of SMU last night, the Mustang’s only L of the season at home in Moody:

It is reported that this was the most anticipated college hoops game in Texas for quite awhile. Yes, Big Blue Nation, that includes UK’s date with Baylor in the JerryDome.

The average price for a ticket to last night’s game on the secondary market was $184, according to Dallasnews.com. Compared with $138 for the Cats against the Bears earlier this season.

“Seats for SMU-Louisville are going for more than the cost of a season ticket at SMU.”

Apparently the best seats — Like, you know, the ones reserved for a fomer POTUS and family — were going for no less than $756.

Larry Brown after the game:

“You can see why they (the Cardinals) are a championship team. I don’t think we showed any poise at all when they went after us. We let a lot of things affect us. That allowed them to really go for the throat. 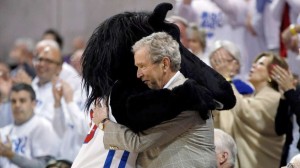 The Vols rated higher than the Cats? Never say it. Well, say it. UK is 21st.

That Rocky Top rating seems a might high. But, Tennessee plays Mizzou Saturday in a huge bubble game for both.

The top four lines according to bracketmatrix.com (a compilation of 98 bracket projections):

Which is to say, with Championship Week creep upon us, that March will indeed be ab fab mad.

If you are as obsessed with the little leagues as I am, know that the Patriot League semis will be on CBS Sports Network this Saturday. Army vs. Boston University. Holy Cross vs. American University.

I hope Nebraska makes the Dance, though it’s way far from a done deal.

They got the Badgers coming to Lincoln in the regular season finale this Saturday. Wisconsin’s got its own run going. Eight Ws in a row. A Cornhusker victory would be huge.

I certainly don’t wish ill health on Coach Cal, but, frankly, it is of some relief to know that he’s suffering from severe pain, due to a bad hip.

It is a plausible explanation for his recent, erratic behavior.

Something nasty in the air along Tobacco Road?

Trending down: What’s a Billiken?

St. Louis has lost three in a row.

2 thoughts on “Hoopaholic Thursday: Plenty o’ This, Lots o’ That”