It is said this is the winningest senior class in U of L basketball history.

116 Ws. Which is not to mention two Final Fours and a national title. And counting. The Cards seem to have swallowed the pill to make that number — those numbers — larger. Go ask Alice.

Ever the contrarian, I feel compelled to ask. Shouldn’t we count the 20 wins from SVT’s freshman year? After all, this is his fifth season as a Cardinal.

Or subtract from the total those of the transfer season that Luke Hancock sat out?

Do we call in the Roger Maris Asterisk Committee?

Of course not. Just wanted you to know I’m paying attention.

I do recall an indelible moment, which memory puts this incredible recent run by the Louisville Cardinals in perspective.

Join Mr. Peabody, Sherman and me in the Way Back Machine, as we travel to the basketball luncheon before the ’10-’11 season.

When ushering in the freshman class that noon before the red & black faithful in attendance, The Rick introduced this diminutive not many star recruit from NYC named Russ Smith. Followed with a please make welcome for Tim Henderson, a walk on from that bastion of prep basketball, Christian Academy.

Followed by . . . well . . . followed by tepid applause, dead air, stunned looks and more than a bit of deflation. There was nobody else.1 At which juncture, I considered that the Cards were coming off a couple of post-season meltdowns, the L to Michigan State in the Elitie Eight as the top tourney seed, followed by a one and done defeat to California, and wondered aloud, “This is the class that’s going to get the Cards back on track?”

The question has been answered.

Saturday was a Senior Day most grande.

Even more fun than last year’s 15 point revenge against the Irish. The best, really, since the Freedom Hall finale, when #1 Syracuse went down and Kyle Kuric etched his name indelibly in Cardinal lore.

From Saturday’s yummy W, here are a few of my favorite things:

* Russ Smith’s left-handed behind the back delivery to Silent L for another of the latter’s emphatic signature power deuces.

* Anton Gill’s first floor move of the season, taking the ball to the hoop, instead of firing from long range.

* Louisville tallied 51 points in the second half. Connecticut scored 48 points for the entire game.

* Shabazz Napier and Ryan Boatwright, “the best guard duo in the American,” scored two field goals each and were a combined 4/24 from the field.2

* The pre-game videos of Tim Henderson’s Shocker stopper threes in the national semi, and Luke Hancock’s four trey parlay that reeled in the Wolverines in the title game. Watching. Them. Never. Gets. Old.

* That the gym was actually filled for tip off.

* U of L’s suffocating match up zone.

* Mr. Bunny’s text to me during the game, “Our defense is ramped up.”

* Marques Maybin sharing how much it means to him that he and Denny Crum shared the same Senior Night.

* That DJ PayDay worked some Otis Redding “Try A Little Tenderness” into one mix.

* That Kevin Ollie was forced to use three timeouts when there would be a media play stoppage at the next dead ball.

* That Smith invited his high school teammates to town to share the moment.4

* That U of L endured a five minute drought late in the first half, but still went to the break up 12. Then answered a 7-2 Huskie mini-run right after halftime with a 10-2 run. 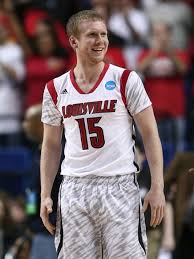 No matter what happens from here on out, the last three seasons, the span of these seniors, have been special.

My hope is that Rick Pitino has learned some valuable lessons. He did his best to tell SVT he wasn’t wanted. He didn’t want to recruit Russ Smith,5 then tried to run him off after his injury-plagued freshman year.

What I love about Tim Henderson is the same thing I cherish about Terry Rozier. They really wanted to be Cardinals and never wavered. How cool is it to see Henderson’s improvement, to know that he can spell relief at a guard spot without hurting the team a bit.

I’m not sure upon which seed line the Cardinals shall land.

But it is stunning that both of the most highly respected computer ranking systems, those of Ken Pomeroy and Jeff Sagarin, now have the Cards ranked #2 in the nation.