A feeling like you’ve been whomped up the side of the head with a goal standard. A gnawing, sour bloat in your stomach, like you not only shouldn’t have eaten that last slice of Papa J’s while watching Dickie V rant about the selection committee’s miscues, you should have been eating real pizza, like from Impellizzeri’s, with the Mute button on.

Blurred vision. Your team is woefully underseeded, and you can’t believe your eyes.

A slight fever, a little cough, and, in some environs, a runny nose and arthritic ache in the hand you use to fill out your bracket.

Etc, etc. I don’t need to go into all the symptoms. You’ve suffered the malaise, and might even be feeling queasy this morning.

Because bracketosis is epidemic in the Big Blue Nation, and in the Ville, as well as such other locales, such as Dallas, Toledo and Hattiesburg. Oh yes, Bloomington too.1

Last thoughts on UK’s and U of L’s seeding.

The Wildcats landing in the 8/9 game was inevitable. It’s where the committee every year places chronic underachievers, teams that failed to perform to the standards of consensus expectation.

Such placement is tried and true behavior on the selection committee’s part.

As for Louisville at the four line, I’ve explained it before, and repeated it. Anybody who pays attention from year to year — You listening, Joe Lunardi and Jerry Palm? — should have seen this “slight” coming from the horizon line. You can read the why here.

Simply stated, Louisville’s fate was sealed before conference play started, when it lost to both Kentucky and Carolina and didn’t play another team with even a scintilla of substance.

As I watched Michigan State run and gun Wisconsin into submission on Saturday afternoon, I said to myself, and to a few close and personal friends who needed to hear my pontificated opinion, that I was then ready to crown the national champ.

So, I found it interesting that all the experts on ESPN last night — Not only Jay and Jay, but Seth and Dickie V and He Who Is Always The Contrarian, Digger — also picked Tom Izzo’s Michigan State Spartans to prevail.

Most of them also had Louisville in the Final Four. Except Digger, of course.

I hate, hate, hate that a possible U of L vs. UK matchup looms as a Sweet Sixteen possibility.

The stress of advancing is severe enough without having one’s most hated rival as a roadblock.

Which is not to mention that, for all its flaws, the Wildcats, tall and strong underneath, are the type of club that presents serious matchup difficulties for the Cardinals.

But, you only play who you play, and that possibility is several games away.

I doubt Louisville will be Californicated or Fariedicized in the 1st round against Stevie Mass’s Jaspers.

The Cats best be on guard against K State. The shocker could come early, they might never get to the Shockers. Bruce Weber is a far better coach than he’s given credit for. 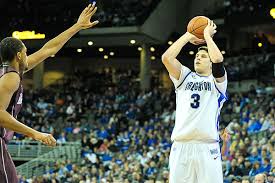 Of the #1 seeds, Arizona appears the most vulnerable to me.

Sean Miller is a fine coach. I just think he might panic in a tight game, and that will trickle down to his squad. I remember how his Xavier team had highly ranked Ohio State all but beaten in the subregional at Rupp several tourneys back, but let it slip away due to coaching decisions.

On the other hand, Steve Fisher knows how to win it all. His Aztecs might also be underseeded on the four line. Lon Kruger’s Sooners might be ready for a breakthrough. Okie State before the Marcus Not So Smart meltdown was legit Top 5, and may be again.

Plus Wisconsin and Creighton are both eminently capable of winning four straight. A Bluejay/ Badger matchup in the Sweet Sixteen could turn into a 116-112 shoot out the lights treyfest.

Some other quick Morning After Thoughts.2

We get as fascinating a first round game as any on Wednesday night when #11 seeds Iowa and Tennessee tangle in Dayton. The Hawkeyes were Top 10 until they spit out the bit late in the season. The Vols have been comin’ on since those silly rumors started about Bruce Pearl returning to the sidelines in Knoxville.

Is there a Florida Gulf Coast in the field?3 Well, if we knew, they wouldn’t be really be surprising one tourney wonders would they?

The TV folks did no favors to the locals.

The Cardinals have that late 9:50 tip on TNT Thursday night against Manhattan.

It’s even worse for the BBN, which shall have to watch 35 first round games before UK tips in the last game Friday night, on CBS at 9:40.