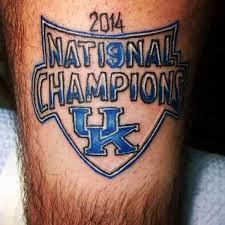 Okay, I have edited the title and the content here. Turns out, I got the name wrong of the fellow who got the tattoo. My apologies to him and to any offended by my mistake. It’s what happens when a U of L fan tries to give props to UK.

Admit it now. You, like me, and like every basketball pundit in the cybergalaxy, thought something like, “Oh yeah, another Big Blue redneck getting a stupid tattoo celebrating a national championship that ain’t ever gonna happen this season.

Tyler Austin Black, that’s who. The guy with the most famous tattoo in college hoops. At least since The Rick had a Cardinal inked on his shoulder after last year’s title. Which tatt is, well, so last season.

If you come here often, you know my favorite team happens to be Kentucky’s arch rival, the school UK bested Friday night. There’s no love lost here for the Wildcats.

That said, credit where it’s due.

For three pressure cooker games in a row — against previously undefeated Wichita State, U of L and today, reigning national runners up Michigan — Kentucky’s neophytes have proven themselves the equal of any team in the land. Finally.

I’ve sat forlornly for three games in a row, watching the Big Blue make one big play after another with hightly contested battles on the line.

I don’t especially like it. But, mouth agape, I must acknowledge it.

It is very difficult to abide John Calipari, who is a really good coach, but whose personal insecurities are always manifest in his wacked nature. But a tip of the hat to him.

It’s one thing to have the best collection of players. Which he does. It’s another to turn them into the best team. Especially after a season of fits and starts. But apparently he’s been able to do that too.

I’m not especially fond of what’s happening here at the end of the college basketball season. But it sure is fascinating to watch. Though very painful.

Aaron Harrison’s game winning trey was as difficult a contested game-winner as I can ever recall. Wolverine Caris LeVert played perfect, smothering defense. The shot still went down. Plus it came on the heels of three predecessors to keep the Cats ahead. Which is not to mention the dagger from the corner that spelled doom against U of L Friday.

Meanwhile, there’s another coach do more props than even Cal.

Three weeks ago, his UConn Huskies1 were battered in the regular season finale by 33, the second of their three Ls to the U of L Cardinals this year.

Still, after besting Sparty today, the Shabazz-led underdogs head to the JerryDome for a date with Florida in one of the national semi-finals.

Okay, it is configurable. The Huskies only turned it over 8 times, half as many as Michigan State.

The Gators have won something like fifty games in a row, but must face the last team to beat them this season in the semi-finals. Red hot Connecticut.

Then, if they pass that test, probably face the surging, all of a sudden steely Kentucky Wildcats. Whom Florida has already faced three times this year, winning the last one by the hair on their chinny chin chin.

All of which blather is not meant to forget Wisconsin.

This is pretty steady outfit, often discounted because, well, let’s be honest, because they are oh so white.

Or, they’ll have hell to pay with Tyler Austin Black.