There is nothing quite as inane, nothing as stupidly intrusive into genuine competition, nothing that adds as little to viewing pleasure while being a total embarrassment as the new staple of televised sports: The In Game Interview.

First there was the SEC hoops Game of the Week chats with a coach. During timeouts no less. You know, the whole Billy Clyde Gillispie/ Jeanine Edwards thing.

Then came between inning Q & A with managers in major league baseball. Which Jim Leyland always hated, because it kept him from his smoke break.

Now it’s spread like a virus to NBA playoff games.

As best I can tell, the networks haven’t convinced the muckety mucks at Indy Cars or NASCAR to allow chats with drivers, as they careen around the asphalt at triple digit speeds. Though it wouldn’t surprise me in the least to discover BIG TV has tried. They do chat with crew chiefs, some of whom, locked into the computerized metrics that have become so important in big time auto racing, are so seriously annoyed, they don’t hide their inner Greg Popovich.1

The above diatribe notwithstanding, there was a moment in the pits during yesterday’s scintillating Indy 500 that was so sublime, so real, so outré, it shall stand as a monumental exception that proves the rule. And this summertime’s first great moment in sports.

As Helio Castroneves, lead-footing it in hopes of his 4th win at the Brickyard, and Ryan Hunter-Reay, who eventually became the first American winner in years, jockeyed for position at 200+ mph in the final go rounds, BIG TV would periodically interview their significant others along Gasoline Alley. 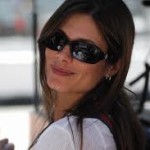 When the racing-suited talking head asked Castroneves’ Sofía Vergara-hot and exuberant GF (and mother of his child), how she was doing, Adriana Henao, gushed, “I’m so nervous, I could throw up.”

After repeating that concern, she continued, with an explanation as to how somebody close by said they’d hold her hair back to protect it from getting mussed, should she need to hurl.

That, mis amigos, is in-game insight at its most compelling.

Which descriptor — compelling — is how this truly great spectacle of racing finished.

After a red flag stoppage, the pedal-to-the-metal six lap dash to the checkered flag was all that and swallow of whole milk to the winner.

The lead changed hands several times between the top two finishers, with Hunter-Reay cutting low on the grass once for a stunning pass.

I’m not that big an Indy Car fan. But, my dad and I listened every year on the radio to the race on Memorial Day. And I think of him every year when the race is run.

The memories are most fond, of hearing with Art Kaplan, Sid Collins and the other announcers in each turn, whose voices would be overwhelmed by the thrust and thunder of the engines as Bill Vukovich , Sam Hanks, Troy Ruttman and Fred Agabashian roared past.

Dad, hope you were listening — and watching — yesterday. It was a good one.