Think Secretariat in the Belmont.

This year, an “off year” by recent Cardinal standards,1 the Cards program (504 points) still finished in 3d place behind Stanford (541.25) and Michigan State (524). You can see the rankings here.

It’s a measure of U of L’s stupendous year in ’12-’13 that the Cards’ winning point total was 83 points higher than that of the Stanford Cardinal this school year.

Because it’s what we do in these parts, I advise. UK finished 15th this season with 372 points.2

✘✘✘Miss: Brasil fútbol. It is still, a day later, hard to fathom just how badly the home country played in the semi-final of the World Cup.

The commentators used the term, “appalling.” Which pretty much sums up Brazil’s performance.

That late score, to cut the deficit to 1-7, was more an exclamation point for Germany’s dominance than an honor goal.

I’m not sure I’ve witnessed any sporting event of such a magnitude with a result quite as shocking.

We’re talking an unfathomable defeat for the tourney favorite in the world’s biggest sporting event on home turf. A passionate nation, pining its very well being on a positive result, enthralled. Then decimated. Hundreds of millions watching around the globe.

The only scenario that even comes close — and it’s marginal at best — is how Russia’s hockey team tanked on home ice in last winter’s Olympics. But, you know, losing 1-3 to Finland in the quarter finals in Sochi, as bad as it was for the Russkies, really pales in comparison to the wake on Copacabana Beach. 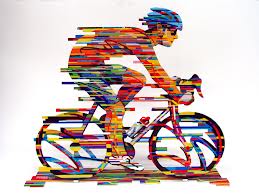 ✘✘✘Miss: Chris Froome. The defending Tour de France champion is out of this year’s race. On a day which race organizers knew was going to be treacherous, given the extended portions of route over hard to travel cobblestones, another of the faves is out.

British sprinter extraordinaire Mark Cavendish was already MIA, after going down on the race’s first day. Ironically, within shouting distance of home town in Merrie ol’.

Sometime tradition for tradition’s sake — including cobblestoned streets on the course — isn’t a good thing.

✔︎✔︎✔︎Hit: “Road Furniture.” It’s my favorite new sporting term, something I’d never heard before, as used yesterday on the Tour de France telecast. It’s what the competitors call roundabouts, islands in the middle of roads, signage, anything that might impede the ride and to which they must pay special attention.

Road furniture. What a great term.

✔︎✔︎✔︎Hit: Detroit Tigers. Justin Verlander, who is obviously still trying to merge together his pitching duties and boyfriend duties to Kate Upton, gave up 5 runs in the top of the 1st last night to the red hot Dodgers.

But . . . his teammates got that five back in the bottom of the second. Then proceeded to manhandle every hurler Don Mattingly brought in, scoring 9 more for a 14-5 laugher.

✘✘✘Miss: Salary Cap. When I tune in at night to get my fix of sports news. You know, scores, injuries, trades, etc. I don’t want to hear on lecture on cap room.

That the Heat are probably asking Chris Bosh to accept a meager $8 or $9 million in the seasons to come instead of twice that could matter less to me.