It’s a little something we in the trade like to call: Game Week.

College football front and center, just as those denizens of the Confederate States of America a/k/a Southeastern Conference know it ought to be. Along with some Boomer Sooners, still simmering from the bad lot they staked in the Land Rush, a Hook ’em Horn here and there wondering if that interloper on the sideline really is The Guy, some Buckeyes on the Banks of the Olentangy awaiting a dotting of the “i,” a battalion of Trojans, a tribe of Seminoles, a zoo full of Bobcats, Bearcats, Tigers & Other Beasts, such as Bruins and Wolverines and various and sundry birds.

And, of course, my arch nemesis, a one man Greek Chorus who goes by the handle Wildcat. Who, as if I’m surprised, has already inquired whether, unlike every past year, I’ll be picking games against the spread this season?

To which I responded, “No, but thanks for asking.”

Anyway, this is going to be a weekly endeavor throughout the season. I shall attempt to post my predictions every Tuesday. But, don’t hold me to it.

And, upon advice of counsel, I feel compelled to advise, these are provided for entertainment purposes only. Caveat emptor.

Abilene Christian @ Georgia State. QB Nick Arbuckle Jr., come on down. Since this is the first game of the year featuring a school in the sport’s “upper division” — those universities eligible for bowl games — and shall be featured on The World Wide Leader, it’s my first consideration. You might recognize Jr.’s homestanding Panthers, as the team formerly coached by the guy who wore out his welcome at Kentucky. And Alabama before that. And Georgia Tech before that. Bill Curry no longer roams the sidelines in Atlanta, a duty now served by second year mentor, Trent Miles, formerly of Hoosier State. Here’s what I know about Georgia State, picked to finish last in the Sun Belt, the most expansive league in the land. Nothing. As for Abilene Christian, uh, well, I’m sort of flying in the dark there too. Among former coaches is Ronnie Peacock, fired after going 4-15 in ’91-’92. “Mad Bomber” Clint Longley played there before toiling ignominiously for 5 pro teams, three south and two north of the border. He is reputed to have once sucker punched Roger Staubach during the Cowboys’ pre-season training camp. That’s the kind of Lone Star toughness that will bring the Wildcats a victory in Hot ‘Lanta tomorrow night.

Texas A & M @ South Carolina. You know there’s a tectonic shift in this sport when SEC teams are lining up against each other before Labor Day. Of course, the relatively new kid on the block is the one that has to hit the road to the game. There shall be no 12th Man in Columbia Thursday night. There shall be more than a few Gamecock faithful, ready to cheer on Coach Visor in his tenth season at the helm, the last three of which have finished with 11-2 records and bowl game Ws. No more Jadaveon Clowney. No more Johnny Foosball. Head Ball Coach not so quietly thinks this year’s squad of his is a contenda. Aggies might not fire without their sparkplug. Cocks crow. 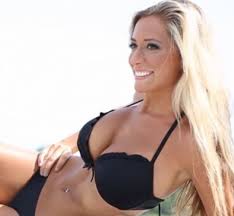 Central Florida vs. Penn State (Dublin). Blake Bortles shall no longer be under center for the Knights. He’s moved from Orlando to Jacksonville to get battered behind the Jags’ O line. Then again he’ll still have sweetie Lindsey Duke to rub salve on his wounds. (Gratuitous bikini shot inserted for your viewing pleasure.) As for the game itself, well, it ought to be interesting. Assuming the Bárðarbunga volcano doesn’t erupt, forcing cancellation. James Franklin has arrived at Penn State to continue the rebuilding project. Opening against last year’s surprise power, a squad with nine D starters back, is no way to get a quick start on a new era. George O’Leary might not know how many college degrees he earned, but he’s a pretty fair football coach. UCF battered Baylor to end last year with a Fiesta. The roll continues.

Tennessee Martin @ Kentucky. Not sure exactly what a Skyhawk is? Yes, a roller coaster at Cedar Point. A jet for the U.S.A.F. True. And, the nickname of UK’s opening foe. The Cats are grateful to be opening at home. Grateful to be opening against neither U of L or Western Ky, to which schools they’ve fallen in the opener the last three seasons. Kentucky should also be very grateful it’s playing Skyhawks, and not Seahawks. Next superstar Patrick Towles notwithstanding, Richard Sherman could probably defend UK himself. The Big Blue is assuredly going to run roughshod over its over matched, over compensated foe from the Ohio Valley Colnference. So much that the faithful shall be chomping at the bit for Ohio’s Bobcats in game deux. Hope shall spring eternal in the Bluegrass.

Miami (Fla) @ Louisville. Is it conceivable that a season opener can be a trap game? It can when you beat your opponent, 36-9, in a bowl game to end last year’s campaign. When your defensive leader is Woofin’ Charles Gaines, who is as likely to cost your team possessions with his mouth, as he is to stop drives with his ability. I’m not as concerned about the loss of DeVante Parker — U of L is loaded at wideout — as I am with Will Gardner taking his first snaps as a starter on Monday Night Football in front of an inebriated  Labor Day throng, a national TV audience and Samantha Ponder. The U shall start a real freshman at QB, a guy not even listed in Phil Steel’s yearbook, a guy whose name I don’t know unless I look it up. Which I’m not going to do. The Cardinals shall score early. The Cardinals shall score late. The ‘Canes shall return to Coral Gables 0-2 against U of L in their last two games.