Every once in awhile you get a game like this.

One of the teams plays really bad, as if it has no intention nor inclination to win the game, and does everything it can along the way to make sure that happens.

That would be Virginia.

But they are playing a team performing even worse, a foe with more resolve to fritter away victory opportunities, its intention to make sure that no matter how bad its opponent is performing, it’s going to do even more to not win the game. It beats itself.

That would be Louisville.

There are two positive takeaways from the game. 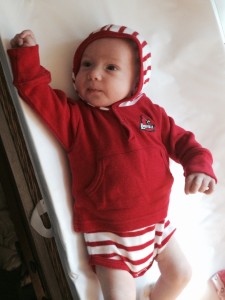 1. Baby Claire, the cutest little granddaughter ever born, still, like her gramps, loves the Cardinals this Sunday morning, despite their woeful performance in Charlottesville.

I watched the game with The Professor, a long time Cardinal diehard, but one with a perennially fatalistic perspective.

Halfway through the 4th Q, with U of L down six points, Will Gardner threw a pick on a 3d & Goal at the UVa 9 yard line. It was nullified by a legit, but truly idiotic roughing the passer penalty on the Cavaliers’ Coley.

On the next play, Gardner found his favorite receiver for the day, James Quick, on a curl route in the end zone, for a one point advantage after the conversion.

So dumb was the Cardinals luck — a second chance score after an interception in the red zone — that The Professor proclaimed, “If there’s a God, Virginia will win this game.”

Let it be proclaimed. Let it be done.

There’s a Deity up there wearing blue and orange for services this morning.

The Cardinals were a well oiled machine on the opening drive of the game.

They took the opening kickoff, and drove 75 yards in nine impeccable1 plays in 5:12 to score.

On the drive, Will Gardner was 4/4 to four different receivers, for 49 yards, including the scoring strike to Charles Standberry. It was a nifty play action, with Gardner putting the ball behind his back after the fake, before tossing the TD.

On U of L’s next 11 possessions, it totaled but 90 yards. On six of them, the Cards didn’t register a first down.

The line couldn’t block. The receivers couldn’t get open. Gardner couldn’t find them if they did. Bonnafon was marginally in more control, but plagued sometimes with bad field position, wasn’t a catalyst for a Louisville score.

Three games into the post Teddy Era, U of L has a QB quandary.

Neither Gardner nor Bonnafon has experience, which needs to be remembered as they must be given a chance to mature and develop.

That said, Gardner displays little leadership swagger. And he has an annoying habit of having his passes tipped and blocked by oncoming lineman. I counted 5 of those yesterday. The official stats say it happened 7 times. The kid’s 6-5 for heavens’ sake.2

It’s simply too early to tell how good Reggie Bonnafon can be. Either this season, or in the future. He does display a more commanding presence on the field.

One of them, or both, need to kick it up a notch. Now.

Frankly there aren’t enough brickbats to go around for all that deserve one.

CB Andrew Johnson was woeful early on. Missing tackles, giving up a 50 yard completion on the Cavaliers’ first play from scrimmage, and getting outmaneuvered for Virginia’s first score on a route to the corner of the end zone.

Of course, Michaelee Harris’s gaffe on that last punt, when he ran into James Quick, forcing a fumble, proved fatal, allowing UVa to tally the winning field goal.

And, what the hell was James Quick thinking on the last play of the first half, inexplicably and stupidly throwing his defender to the ground after the play? Which caused a little sideline brouhaha, giving the home team some renewed fight after the break.

On the plus side, Todd Grantham’s defense played pretty well. They made several red zone stops, and another in the fourth which should have sealed the game, but for that game deciding special teams’ fumble.

Bottom line: It was just an ugly damn football game.

U of L lost two fumbles, and Gardner had two interceptions that appear in the box score, and one more that happened on the field, but was nullified by a UVa penalty.

Virginia coughed up a fumble, and each of their QBs had a pick.

U of L had as many giveaways as 3d and 4th down conversions.

Which ugliness would have been easier to bear, had U of L found a way to win, instead of a way to lose.

The day did end on a somewhat happier note for Cardinal fans.