And, to all of you similarly situated, we are, as you surely know, but hours away from six months of satisfaction, starting Friday with the opening tip off of the ’14-’15 college hoops campaign.

In addition to following my beloved Louisville Cardinals in separate posts of their own, with recaps of every game, team updates and anything else that might be required to fill my/our addiction, I shall be providing these periodic journals. They shall be jampacked with perspective, facts, rumor, innuendo, opinionation, putdowns and shoutouts.

The young student-athlete is supposed to announce in the next day or so which institution of higher learning he intends to attend next year, taking along with his athletic and educational talents.

The question is where is he matriculating at present?

Last year he studied and played at Evangelical Christian School in Memphis. Then he transferred to Lausanne Collegiate School, also in Elvisville. But he was declared ineligible to play by the high school sports ruling body in Tennessee.

So, he announced then he’d be attending Reach Your Dream Preparatory Academy. Which may be located in Memphis or not, because the “school” did not actually exist at the time of his announcement. It is believed the future provost of that august educational academy shall be Gerald Hamilton.

Who, by mere coincidence, happens to be Labissiere’s legal guardian. And, a fellow claimed by several reports to have wondered aloud to the occasional AAU coach how he might profit monetarily from the guidance he is providing his academic/athletic protogé?

So, based on past trends, and just a hunch, I say, regardless of where or whether he hoops it up this season, he’ll surely be adorned in Big Blue & White next fall, trotting onto the court at Midnight Madness to the strains of “On, On UK.”

Unless, of course, he passes on that fan fair event to study in the library, getting his grades up before the campaign begins in earnest.

I have recently posted a list of my ten favorite U of L games ever. You can read it here.

I’ve received a lot of feedback, including laments that I failed to mention some other Cardinal games of note.

Among the games mentioned, that didn’t make my list, are the W over LSU in the ’86 regional final, the W over Arkansas in the ’83 regional semi that set the stage for the Dream Game in Knoxville, the MVC playoff game W over Memphis State in Nashville in ’72, and that from way back after a brawl with players and fans W at South Carolina in ’88.

That last one is more than a footnote this day, the first of the fall signing period.

Playing for George Felton’s Gamecocks that day was the father of one P.J. Dozier, a lanky guard coveted by the Cardinals, but who this afternoon announced he’s going to be following in dad’s footsteps, instead of coming to U of L. 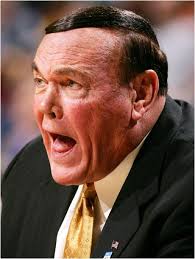 One of my favorite coaches ever is former Purdue mentor Gene Keady.

Who was a truly nice fellow, who liked to hang in the media room on off days during the NCAA tournament. At least he did once, when U of L happened to be in the same sub-regional, and I was there to chat him up.

The guy could really coach. But, lamentably, is more well known, for his comb-over. It was truly hideous to look at, and inexplicable.

Keady, a self effacing sort, now admits, according to a story here, that it was truly ugly.

And, the rest of the story, it was actually an extension, and he spent $600 a week to maintain.

One of the more heralded freshman in the land is Ohio State’s D’Angelo Russell.

Who is originally from Louisville, I believe.

So, how come he’s not playing for The Rick or Coach Cal?

I have a theory, more years than not, there’s a school that slips into the Final Four from out of the blue. Like, you know, UConn, which has done it twice recently.

And captured the crown both times.

So, as the season progresses, I’m going to be tracking teams just outside the national title conversation I think could slip in to participate that last weekend of the season.

Since the campaign hasn’t started, here are two on my watch list: Nebraska. Arkansas.

If today’s tome wasn’t pithy enough for you, keep coming back.

It’s early. I plan to peak in February, March and April.