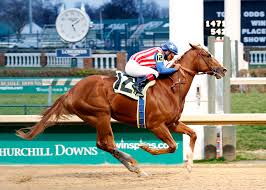 Back before they supersized Churchill Downs, making it casino-ready, ripping away much of its timeless charm, turning it into the equivalent of an Oldham County McMansion with too many rooms and roofs and vaulted ceilings, there were nooks and crannies of the facility that were ageless.

There was a minor eating venue along the brick walkway underneath the first floor clubhouse, almost to the first turn. You could stroll in there on Derby Day, and it felt like yesteryear, like the ladies should be wearing bustles; the gentlemen, fedoras.

You could almost hear the touts whispering, “It’s gonna be Old Rosebud’s day.”

That spot , gone with reconstruction, comes to mind in the wake of the aftermath of American Pharoah’s Triple Crown triumph.

There is an excitement permeating the Sport of Kings that’s been missing for oh so very long. And not just here in thoroughbred country, but all across the land.

It seems to me that part of that buzz is a longing for those days of yesteryear. When the Derby Day dandies and their ladies, congregating in some niche of the Downs, spoke of Sir Barton. Of War Admiral. And Citation.

For any number of reasons, mostly cultural, the buzz won’t last.

But, it’s fun now. And kinda feels like old times in Derbytown.

I’m really pissed at myself.

And, for reasons that make me feel like I need to apologize.

I was at the Pitino/ Jurich press conference the other day, the one announcing the extension of the U of L coach’s contract for another four years.

I’m not going to get into the numbers. I’ve used the word “obscene” to describe what Pitino and other big time college coaches make. I believe it is an apt adjective.

What I lament, however, is that I didn’t take the opportunity to ask Rick Pitino and Tom Jurich their thoughts about compensating college athletes? It would have been appropriate, given the prime focus of the proceedings.

As soon as I walked out the door of the Cardinal hoops practice facility, I realized my mistake.

As for the Pitino extension, I’m all in. I surely can’t think of anybody else I’d like to be coaching my team at this juncture.

I do believe The Rick was re-energized during the Peyton/ Luke/ Russ/ Championship era. I believe he works as hard at his job as anybody in the biz.

To me, the most interesting comment he made Tuesday, was when talking about U of L’s Hall of Fame Asst. AD SID, Kenny Klein. He mentioned that Klein’s loyalty to U of L was manifest, overcoming other lucrative opportunities that have come his way.

My sense is that aspect of Klein’s character took hold also in Pitino. That his brashness, his need to excel and propel himself up the food chain of coaching, abated. That he realized how good he has it at Louisville, how comfortable it is here, how his opportunities for success and championships exist here.

Though it’s early, and the kid is likely to change his mind four times, between now and enrollment day, V.J. King, a ***** forward in the class of ’16, committed to U of L today, choosing the Cards over UK, Arizona, UVa and UConn.

Alright, and one more mea culpa.

I have zero insight to offer about last night’s Golden State W in the NBA finals.

I couldn’t stay awake. Tried to watch, but fell asleep in my recliner, awoke, watched a bit more, dozed again, finally giving in to slumber, when I saw GS was up 20.

I’ve said it before, and I repeat: Start the games earlier.

Of course, weeknight games on the Left Coast can’t start before 9:00 EDT at the earliest. But those in that time zone, like, you know, Cleveland, could, and should, tip, at least an hour earlier.

After reading about it, and watching some highlights, I’ve changed my mind. I now believe that the Warriors shall prevail. Not that my unsubstantiated opinion means anything.