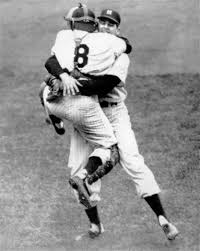 Where have you gone Yogi Berra/ A nation turns its lonely eyes to you.

Oh that it were true.

That we as a culture in this time of vitriol and vainglory would actually take a moment and consider the passing of a true superstar in the country’s national pastime of his era. Someone who excelled through hard work and talent yet remained self effacing. Someone who put his career aside to serve his country, was there at the Normandy Invasion in WWII.

I fear the lessons we can learn from the life of Lawrence Peter Berra will be fleeting, lost in a Kardashianian miasma of political diatribe, the whining of overpaid crybaby athletes, at a moment in time when glitz trumps grit.

That we will remember his indelible aphorisms, but gloss over his accomplishments and the American values he represents.

It is the yin and yang of Yogi in that photo at the top, as iconic an image as exists in sports.

Yankee catcher Berra had just engineered the greatest game ever pitched in baseball, Don Larsen’s perfect game in Game 5 of the 1956 World Series.

After the final out, Yogi, consummate professional always, reacted with the joy of an adolescent, running toward the mound, jumping into the arms of his battery mate in celebration.

The visceral thrill of victory incarnate.

He played on 10 World Champions. He’s in the World Series record book for most games played in the October Classic, most at bats, most hits and most doubles.

He’s easily in the argument as the greatest catcher ever.

He was a notorious bad ball hitter. He rarely struck out. One season, just a dozen times in 650 at bats.

He also had a penchant for the quirky observation, succinctly stated.

That he might not have been the actual originator of many quotes attributed to him matters not.

As Yogi himself said, “I really didn’t say everything I said.”

So he was beloved. For his talent. For his unassuming Everyman personality. For his lack of guile. For his sense of honor, his embodiment of the values of the Common Man.

He was many things which we Americans should aspire to.

At the lede, I coopted the well known Paul Simon lyrics about another Yankee icon.

All things considered, we should probably lionize Berra more than DiMaggio. He represents the America that seems lost, long gone. No Marilyn in his life, he was married to his beloved throughout. She took care of the family budget.

He was a smart man. But a simple man of humble beginnings. A proud man. But not prideful.

He stayed in the game after his playing days were over.

But stood up to George Steinbrenner, when the latter didn’t respect Yogi’s sense of dignity. Then forgave the brash Yankee owner, when a heartfelt apology came.

After the rapprochement, he returned to Yankee Stadium for the first time in over a decade, to be feted on a day in his honor.

2 thoughts on “Yogi’s Gone, So Too What He Represents”