Standing in the taco line next to U of L’s then new, recently anointed head coach at  2003’s Football Media Day, I attempted to engage Bobby Petrino, mentioning some imbroglio or another taking place at Auburn, where he’d been OC the season before.

Uneasy, fashioning a crinkly, forced smile, obviously wishing to be left alone, he mumbled, “Yeah, I saw that,” or something to that effect. Which, if subtitled, would translate into “I’d really like to grab a little lunch here without engagement, and head back to my office and watch film by myself.”

Fast forward to this Saturday past, at this season’s beginning of practice meet and greet with scribes and talking heads. Petrino is a different person. After his Belknap Campus abdication for a self-shortcircuited stint in Atlanta with the Falcons, his successful on-field performance and peccadillo engendered meltdown at Arkansas, a season in exile, a season helming the Hilltoppers in Bowling Green, and a Tom Jurich rapprochement rehire at Louisville, Bobby P appears finally at comfort with himself.

Walking to the mic, he waved at a photographer, joked with good nature how quiet the room was, and hurled a gentle barb at one of the assembled writers.

With a welcome smile, he opened by saying  how much “fun it is to be in camp.”

He joked about defensive ace Devonte Fields, who was way out of shape this time a year ago, “We were waiting to see if he was going to throw up again or not.”

When asked how much freedom QB Lamar Jackson would have this season, Petrino smiled a totally different grin than the one a baker’s dozen years ago, this one warmer, confident, with a wink.

“He has the freedom to do exactly what we tell him.”

And when questioned by a millennial about the new NCAA recruiting rule now allowing retweeting, he deadpanned, “I haven’t thought about it for a second.”

Actually Saturday’s meeting with massed media was BP’s second of the week. He shared his thoughts several days before on the eve of the first practice.

That he met the press twice in a span of days is a sure sign of Bobby Petrino’s comfort level.

Injuries in football are a given.

It is a game the human body, no matter how padded, is not meant to play.

Often a team’s season is turned around by injuries. Not only for the worse.

Cardinal fans will surely remember the West Virginia encounter, when the Mountaineers starting QB Adam Bednarik, a vet, went down. Should I even mention the name of his sub? OK, Pat White. Who led his team back from certain defeat to a 3OT W.

A happier memory: Lexingtonian Kyle Bolin coming off the bench to quarterback Louisville over Kentucky.

How injuries have adversely affected the fortunes of teams are too numerous to mention. Every week, every season. Everybody’s got their most memorable.

All of which I mention because of the Stacy Thomas situation. Inked in as a starting LB for the Cards, he underwent surgery Saturday morning for a “non football related injury.” Thomas’s father is sharing no more info. U of L is similarly and mysteriously mum.

What I know is the Cardinals are only three days into practice, and a key piece of the defense is out. For now. For long? For the season? 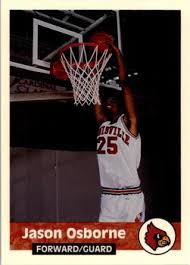 In my piece the other day about the Crawford Gym celebration, there was one observation that didn’t seem appropriate to mention.

Nor all that revelatory, though it reminds of one of the not so successful scenarios in U of L hoops lore, in the mid 90s when matters started to go south in the Denny Crum era.

As people were dispersing from the event almost two hours after it started, in walked Jason Osborne. The local kid was two and done for the Cards, averaging 9.6 ppg as a frosh, 11.6 the following season, his last.

Osborne was an academic casualty. The kicker is that he didn’t flunk out of school. He was not declared academically ineligible by the NCAA. He simply didn’t meet the school’s own elevated requirements for eligibility, in effect at the time.

Under Donald Swain’s not especially sensitive to athletics reign, the standards were raised.

Anyway, it was a pity. One guy’s opinion, Osborne coulda been an all-time Cardinal great. But wasn’t allowed the chance.

And when I saw him walking into Crawford the other day, way way late thereby missing the festivities, it just seemed so sadly a photo of his short career in the red & black.

Looking forward to the upcoming U of L soccer season.

Though I’m a bit baffled.

Not so long ago, after the hiring of Ken Lolla, the future looked so very, very bright. A national runner up, other NCAA success, that Lynn Stadium opening victory over highly ranked Maryland.

Seven ACC schools are ranked in the Top 20, including half the Top 10.

Weren’t the presence of highly regarded Lolla, and that new facility proclaimed the best in the land, supposed to give U of L a major recruiting bump?

It’s been several weeks, and it’s really yesterday’s news to ardent Cardinal fans, but I gotta mention the cbssports.com article ranking, “Which Schools are Best In Both Football and Basketball.”

In a development that would have been frankly inconceivable even a decade ago, the University of Louisville is ranked at #5. The Cards sit only behind Florida, Ohio State, Wisconsin and Oklahoma, in that order. And are perched ahead of Michigan State, Texas, Alabama, Oregon and Notre Dame.

This is truly a stunning development. Especially for a guy like me, who waited three decades from my first Cardinal hoops game for that initial title in ’80 — friends used to kid that my headstone would read “He Only Wanted One” — and who marched in protest to The Thinker with a gaggle of other students in the mid 60s when then school president Philip Davidson wanted to get rid of football.