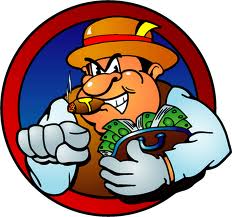 That deafening silence you hear is the lack of braying by my all of a sudden nowhere to be heard nettlesome naysayers.

Last weekend’s boffo predictionation included the Stanford and Auburn upsets, along with the Buckeyes, who smote their arch rival to the north, and the University of Louisville Cardinals who emptied Grocery Store Field faster than if there had been hurricane warnings, and turned the remaining members of the BBN into a bulging eyeballed, frothing mouthed Ralph Steadman caricature.

Only Boise State let me down, but more about that in a second.

I have read that this Saturday will be the first time ever with five battles on the same day featuring two Top 25 teams. And there’s a sixth in the PAC12 on Friday night between Stanford and Southern Cal.

Stock up on supplies, ye pigskin perennials, you don’t want to need to be running off to the corner market while the ball is in play. And that’s gonna be all day and all night.

In championship form myself, here are five sure winners:

Fresno State @ Boise State. So, you may ask why am I addressing this game when only one of the teams is Top25, and avoiding the Memphis State vs. Central Florida in the AAC title game? Legit question. The short answer is: Because I can. My keyboard. My website. My shtick. And I hate Memphis State, and UCF is a question mark because coach Scott Frost, who is still in Orlando as I write this on Tuesday, might be gone to Lincoln by kickoff. Just as salient is the unusual situation where Fresno and Boise are meeting not only for the second time this season but for the second weekend in a row. There shall be no lack of familiarity. Tabbing the Broncs as last week’s winner was my only miscue. So, the blue fielders are not the only ones looking for payback in the rematch. Moi aussi. Both Boise State and Seedy K let you down last time around. We won’t again.

TCU vs. Oklahoma. This is also a rematch. Boomer Sooner rolled over the Horned Frogs several weeks back. Rather handily. Lincoln Riley has proven he can coach the players he helped Bob Stoops recruit. Okie’s only L was by a TD in Ames to one of this season’s hottest surprises, Iowa State. The Sooner name we’ve all heard so much we are prone to hurl when we hear it again is Baker Mayfield, the Heisman “lock.” Given what a crotch grabbing boor the guy is, we can only hope for a Charles Woodson bests Peyton Manning Dewey Beats Truman moment on awards night. Wouldn’t that be Lemarvelous. Mayfield is a putz, but he does lead one of the nation’s best offenses. TCU, whose coach Gary Patterson is now inked into the 22d century, is a top notch defensive outfit. But it surrendered 38 to Oklahoma in Norman. Boomer Sooner might not tally that many this time around on a neutral field, but will score enough and Texas Christian hasn’t the firepower to match them on the scoreboard.

Ohio State vs. Wisconsin. Who knows, if one Brent Bielema hadn’t made the dumbfounding move of leaving Madison and taking his talents to Fayetteville several years back, he might still have a job and be roaming the sidelines this very weekend? But that’s simply silly conjecture. Truth: He’s sending out his resumé and Paul Chryst, his more than satisfactory replacement, is now 33-6 while leading the Badgers. And, as we all know, Wisconsin is undefeated so far this campaign, doing its best Rodney Dangerfield impression. In their Ws, the Buckeyes have dismantled all, except the Nittany Lions. But they fell at home to Oklahoma and were ripped asunder in Iowa City to the nothing special Hawkeyes. Plus, due to their failure to avoid cameramen on the sidelines, there are scarlet and gray injuries. Wishful thinking this is, but I’m goin’ with the Badgers.

Miami vs. Clemson. Was The U’s L last week to Pitt just slippage, an aberration? Or a sign that the ‘Canes aren’t so invulnerable away from Coral Gables or miles away where they actually play their home games? What I do know is that Mark Richt made an egregious tactical mistake against the Panthers, inserting a relatively untested second stringer at QB for a critical series with half a quarter to play. It had the odor of desperation. It cost Miami the game. How much confidence will back calling signals Malik Rosier have this game against the defending national champs? Methinks not so much. Under Dabo, the Tigers have become a top shelf power. They know how to win. And have fun doing it. They’ll be Dabo dancin’ their way to the Final Four.

Auburn vs. Georgia. A pal asked me at dinner Monday night if Gus Malzahn would leave the Plains for Arkansas if he won the national title? I offered it would make it easier for him, one guy’s opinion. Which is just babble since we’re weeks away from that. All Auburn has to do is beat Georgia for a second time in a month, and a week after surviving the blood bath that is the Iron Bowl. Thus, there is but one question to be asked: Are the Tigers good enough to beat the Bulldogs twice and the Crimson Tide in a month’s span? Despite their two early losses — to Clemson and LSU — Auburn has a mighty fine football team. But, for the life of me, I can’t see them pulling off that feat. The Smart choice is UGa.