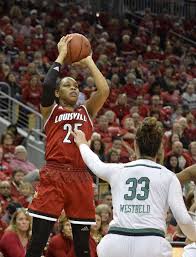 Though of this mind for awhile, I shall, for dramatic purposes, take literary license and offer the following moment as evidence of my firm opinion.

For what happened last night at the Yum!, the performances of the University of Louisville’s undefeated women in toto and Asia Durr and Myisha Hines-Allen specifically, was nothing if not dramatic.

Not drama in the classic sense of sports competition, a closely contested battle won in the final moment, but dramatic performance of the highest order, genius of the craft. Like, say, Michelle Williams in “Manchester by the Sea,” or Meryl Streep in “Sophie’s Choice.”

And Asia Durr on the hardwood.

The moment came as the clock expired at the end of the 3d quarter of the Cardinals’ evisceration of the #2 ranked Fighting Irish. U of L was ahead by a frankly dumbfounding 36 point margin at the juncture, the tilt long out of reach for the gobsmacked visitors, and Durr had already netted 7 of the 9 three pointers she had attempted.

The Irish had just scurried down court with the rock in hopes of a last second tally in the period, something to regain some pride, a launch point for some 4th quarter pullback. But U of L, in the proverbial zone as we wags are prone to say, pilfered the rock, got it to Durr beyond the arc as the clock approached triple zeros.

At which point I committed to this opinion:

Asia Durr is the best shooter ever to wear a University of Louisville uni.

Better than Shoni. Better than Angel. Better than Grif. Or Dejuan, or Francisco, or Taquan. Or even my main man from yesteryear, Allen Murphy.

I invoke that moment for, in essence, it was that last bite of chocolate decadence you fork into your mouth though already sated, simply to confirm it’s the best dessert you’ve ever tasted. The game was long won. Upon watching a replay before this writing, Kara Lawson and Rebecca Lobo had long run out of superlatives.

It was the final exclamation point, one totally unnecessary but oh so very resonant.

The truth is I’ve believed in Durr’s supremacy for a bit. During the half, I shared it with some fellow scribes, none of whom were of the mind to disagree.

Asia Durr is Streisand, her stroke perfect as a Stradivarius.

Durr was far from the only transcendent performer in red last evening.

Truth is all the Cardinals came to play, and executed Jeff Walz’s immaculate game plan to perfection.

And, as the Professor always says, “You look good when you make your shots.”

At intermission, when the Cards were up a unimaginably comfortable 56-28, they had drained 23 of 32 shot attempts. For the game they hit 65%, just short of a school record.

If Durr was Ms. Outside, Myisha Hines-Allen was Ms. Inside. (Which I type with apologies to Sam Fuehring who also performed with flair and fire, aiding on 6 makes.)

Hines-Allen, playing mean, hit 15 of her 20 FG attempts, tallied 31, grabbed 12 rebounds, dished out 3 assists, had 2 blocks and 2 steals. And generally had her way the entire evening.

Though this program-affirming victory is arguably as big as any in history — yes, kids, including beating Baylor in the Dance  — perspective is in order.

As Coach Walz admonished in the post game press conference, “We didn’t win any trophies tonight.”

And, to be fair, Notre Dame’s #2 ranking was based on reputation as much as performance. This is a decimated Irish squad, gutting it out with only 7 scholarship players healthy.

Yet their only loss was at UConn, which is hardly a blemish.

But, make no mistake, the was a Cardinal beatdown most fowl. (Pun most intended.)

The Cards fell behind 2-6, then came the anschluss.

HoF coach Muffet McGraw was forced to call a timeout at 5:52 of the 1st, her team down 17-9. Then called another, still  in the opening stanza at 3:42, by which time the Cardinals had increased their advantage to 15 at 26-11.

At one point after a Cardinal threeball bomb swished through the nets, McGraw turned to her assistants, held out her hands palms up, and shrugged.

For Cardinal fans, it was a joy to behold, the best performance by a Cardinal team, any sport, any gender, in a long long time.