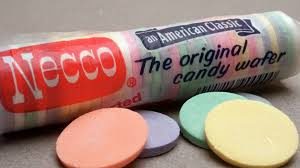 If you are old enough to remember the Bard Theater, now long gone from its spot on Bardstown Road just northwest of the Taylorsville Road split, where you like me might have spent adolescent Saturday afternoons cutting up with pals, terrorizing the manager and taking in double feature matinees of Red Skelton and Abbott & Costello; if that registers in any way, then you might remember, or perhaps even have savored the candy of my youth.

Necco Wafers. A nickel at the concession stand after your mom dropped you off so she could play cards with her friends in peace for a few hours. They were the go to treat, since they lasted so long. Though that braying you hear in the background is some contrarian feedback from the Milk Duds crowd.

Anyway, Necco Wafers came rolled up like quarters in waxed paper and were a mix of mildly fruit flavored discs, plus chocolate and cinnamon and maybe clove. I took to getting the all chocolate roll when available, which was like, you know, a really cool development when you are 11 years old and only had that nickel to spend after the twenty cent admission.

Like I indicated the candy’s longevity was its primary asset.

Because, to be honest, those flavors were but a vague hint. There was sweetness, since they were probably all sugar, but the primary recollection, which never dissuaded me, mind you, is that they tasted mostly like chalk

Even the outliers — Auburn and Oregon — won their league tourneys, and prevailed as favorites in the Round of 32.

So, kiddos, as we continue to gather our wits from a weekend after which our eyes needed drops and a rest, a four day lounger residency when we ate too much pizza, too many chips, corn and potato, boxes of Girl Scout cookies, chocolate parfaits, mixed nuts, ham & cheese sandwiches, and, at least for some of us, the occasional green vegetable — benedictine on crackers counts, right? — and Orville Redenbacher’s finest, after all that, it’s time to  put Benny Impellizzeri on speed dial, time to restock the cupboard, and get ready to hunker down for the best slate of Sweet Sixteen battles in a decade.

The benefit of No Cinderellas is all the big boy contenders trading haymakers the weekend coming.

By the by, if you’re thinking of tracking down some Necco Wafers, either for nostalgia’s sake or out of curiosity, think again. There seem to be some available out there, but I’m not so sure. The originator, the New England Candy Company is R.I.P.

So, yeah, I hate the Blue Devils as much as the next hoopaholic.

Jealous of their success? Of course.

But there’s that Danny Ferry Night Train Lane clothesline of Jeff Hall at the buzzer in ’86 that I’ve never gotten over.

So, for me — I daresay I’m not alone — the burr still in my shoe after watching 48 games and learning that Flo isn’t a maid, is why Zion Whatsisname wasn’t whistled for a charging call on that last Blue Devil-saving play. The first Knight who tried to impede his progress as barreled down the lane to he hoop ended up on his butt somewhere past the endline next to Tracy Wolfson.

I mean the guy had locomotive breath. He was a runaway train. Yes, that was Eric Roberts riding Zion piggy back has he steamrolled his way toward the hoop.

And then there was RJ Barrett’s, uh, gentle push of the UCF guy between him and the hoop, allowing him access to the rock for the game winning putback.

Yeah, I know, the Knights had two shots at victory as the clock was ticking down. And there’s that missed opportunity with a 2 on 1 break a few moments earlier that would have put them up six.

But, come on, dudes, we know you wanted more Zion, but you gotta make that charging call.

While I certainly don’t want any of them to win the title, I must say it brings a bemused smile to see Bruce Pearl, Kelvin Sampson and the Ghost of Will Wade and the hovering Joe Btfsplk cloud their felonious presence brings to the NCAA’s second weekend.

Anyway, not that it matters a bit, here’s whom I like Thursday and Friday.

Duke. Sparty. (Which would set up Tom Izzo to attempt a second W over Coach K in their dozenth meeting.) The Zags and Red Raiders. (Michigan’s recent successes halted for a year.)

UVa and the Volunteers. (Close escapes are not an indicator of future performance.) Tar Heels — Sigh! — and Houston. (Another favorite bites the dust.)