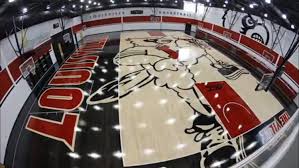 My memory is hazy, but if I recall correctly, and I’m probably not, during the early Doctors of Dunk days of the 70s, it was Grif’s idea for the team to wear those old timey M.D. shirt/ jackets during warmups.

I believe it was a cool idea, but one and done nonetheless. Since the garment was too restrictive, and the players didn’t like the feel.

Fortunately the most cool U of L hoops logo ever has never gone completely away. And, thanks to Chris Mack’s respect for the tradition of Cardinal basketball, is back with a vengeance.

The court at the practice facility now sports a 94×50 Dunking Cardinal logo.

So, when I first saw it, my immediate reaction was to write Kenny Klein, and ask if there were any plans to do the same to the game court at the Yum!?

Unfortunately, not at this time. Sigh.

One can only hope that one or more of the Big Donor Fat Cards — those folks who can afford to pay $Four Large$ to attend Mack’s fantasy camp — will come with the moolah to get this done.

It would be an absolutely wünderbar way to herald this new era in U of L Basketball.

Stewart Mandel is the college football editor of theathletic.com, which my Glorious Editor and I quote often. (Because it’s a great site, and worth the tariff, if for Jeff Greer’s reportage on the Cards alone.)

Mandel’s been around, and is one of the best and most astute writers covering college sports.

Here are two of his recent responses to reader’s inquiries, which are germane to Cardinal football, past, present and future.

Asked which rookie coach has “the brightest prospects at their current school,” Mandel replied,

“Long-term, there are so many guys I could throw out there as having the brightest prospects, but I’ll stick with a guy whose praises I’ve been singing for some time: Louisville’s Scott Satterfield. Mind you, the Cardinals will be absolutely awful for at least his first season (thanks a lot, Bobby Petrino). But Satterfield is a much better recruiter than his predecessor, andLouisville as a program is set up for success as well as any school in the ACC not named Clemson or Florida State.”

Asked the percentage for coaches now out of the game to return to the sidelines, Mandel had this to say about U of L’s recently departed,

“Petrino: 0.5 percent. The guy was generally loathed to begin with, then completely torpedoed Louisville’s program. He’s absolutely going to be somebody’s offensive coordinator by next season, but that’s probably it.”

In Bloomington the other night, against the Top 25 Hoosiers, the U of L Nine coughed up most of a 6-0 lead in the bottom of the 4th. The Cards later went up 7-5, but lost that advantage also.

What the #7 ranked Cardinals are fighting for now is a coveted top 8 national seed, which means they could advance to Omaha without leaving the friendly confines of The Jim.

Operative word: could. In recent years, the Cards have been thwarted at home in the Super Regional.

Florida State comes to town, starting tonight (Thursday) for a key regular season ending series. The perennial power is having somewhat of an off year, but remains tough, given the Seminoles are coached by Mike Martin, the all time NCAA wins leader.

If Stewart Mandel is one of the more respected college pigskin scribes, cbssports.com’s Gary Parrish holds the same stature in college basketball.

Like most who care about the sport morning & night 365, he’s already projecting next season’s opening Top 25.

He’s got the Cards slotted at #4 behind Sparty, the Blue Devils and Evil Empire, and just ahead of Rock Chalk Jayhawk, Memphis State and the Terps.

Parrish factors in the return of both Jordan Nwora and Steven Enoch, to provide significant experience to U of L’s heralded rookie class. Fingers crossed.

ESPN’s Joey Brackets, in real life a sports marketer at St. Joe’s in Philly, and the “inventor” of the whole Bracketology thing, has the Cards as #2 seed for next year’s Dance, playing Radford in St. Louis in the Houston Regional, with UK as the #1.

Caveat: Don’t call your travel agent just yet. We’ve got the NBA playoffs, PGA, Liverpool vs. Hotspur in Champions League final, US Open Golf, The Open, Wimbledon, US Open Tennis, World Series, college pigskin, bowl games and a few other sporting events of significance before Selection Sunday. (Not that it’s ever totally out of our minds.)

Still anxiously awaiting the announcement that Spectrum, my cable provider of choice, will be a home for the new ACC Network.

The tilting at windmills NBA2LOU trotted out a bunch of local and statewide sports icons as a display of support to bring a pro basketball franchise to Louisville.

Regardless of how you consider this idea, hear me now and believe me later: The. NBA. Will. Never. Have. A. Team. In. Louisville.

Louisville’s women hoopsters will participate in the Virgin Islands Paradise Jam next November.

Looking to spend next Turkey Day on the beach and with a little basketball, here’s your chance.