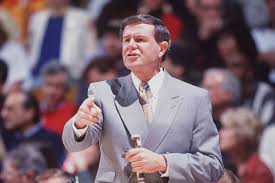 Of course, anybody who loves the Cardinals is glad to hear that iconic former Cardinal hoops coach Denny Crum is recovering from his latest stroke.

Incredible coach. Easily among the best ever that roamed the college sidelines. Good guy. He was always accessible when running the program.

And, to be frank, recency bias and revisionist history notwithstanding, Crum is responsible for elevating University of Louisville sports to the highest levels nationally. Without Denny and his two titles, there would have been no Howard Schnellenberger, nor any of the incredible successes that followed.

One guy’s opinion. Feel free to disagree if you must.

Those whose allegiance to U of L sports germinated after the arrival of the millennium or the decade proceeding it, might only know Denny from his name on the court, or the standing O he gets when introduced during a tilt at the Yum!.

Denny Crum was once the Gold Standard of college basketball. Ask Coach K who schooled him several times early on in his career?

It’s fascinating how low key it all was when his reign started. Especially compared with the hoop de doo razzle dazzle that greeted his successor.

John Dromo, who took over for Peck Hickman before Westley Unseld’s senior season and won 75% of his games over 4+ campaigns, had heart problems. Former Card baller Howard Stacey finished on the bench in the ’71 season.

U of L prof Carl Abner led the committee charged with choosing the next coach. Without any fanfare whatsoever, we learned of the hiring of John Wooden’s assistant and former juco head coach in a little article in C-J.

He didn’t seem so Cool Hand Luke — a nickname bestowed by Al McGuire — when a Jim Price/ Henry Bacon-led Cardinal contingent with high expectations dropped the season opener at Florida. After listening to the L on the radio — most games weren’t on TV in those ancient days — my pal and I looked at each other with looks of disappointment and concern.

Then the Cards ran off 15 Ws in a row, smoked Memphis State in an MVC playoff game for a spot in the Dance, and jitterbugged to the Final Four.

And it was just the beginning of a great run. Success of the highest order ensued.

OK, I’ll stop. Don’t want this to sound like some sort of obit.

It’s just a reminder that, during those halcyon days, for a decade and a half or more, the University of Louisville was arguably THE program in college hoops.

Continue to get better Denny. You deserve more than a few more standing Os at the Yum!.

3 thoughts on “Get Well, Denny”