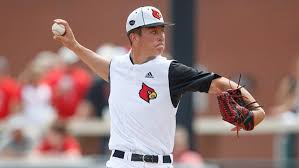 IU came back with 4 in the 6th, but Adam Elliott calmed things down somewhat.

Louisville kept hitting and scoring, pushing ahead 9-4, heading into the 8th. During the top of which inning, Drew Campbell made what turned out to be the game saving play, robbing Ryan Fineman of a homer. IU did score a run, cutting the lead to 9-5.

Matters got really scary in the IU 8th, the Hoosiers scoring on a botched DP, forcing Coach Dan McDonnell to bring in closer Michael Avene to close the inning.

Then the game went Alfred E. Newman furcshlungener in the 9th. McAvene lost his mojo, gave up a homer and RBI single, and was forced to hurl way too many pitches. Then, after mildly protesting — if that — the Cards’ closer was tossed without warning by thin skinned Ken Langford after a 2-2 pitch was called a ball.

More details, maybe, after this whole regional plays out.