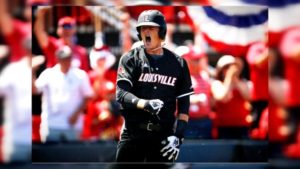 Not a lot of schools have ventured into The Jim this season with a hurler more heralded than the ACC’s best, Cardinal Reid Detmers (11-4, 2.96), he who now holds Louisville’s  all time season strikeout record, 156 and counting before Friday noon’s first pitch.

But, in addition to holding a hard to conceptualize 10 game winning streak against U of L, that’s exactly the East Carolina held in its hands.

And he had the rabid and raucous Pirate faithful pumped to the max, when he struck out the side in the bottom of the 1st, and proceeded to mow down the first ten Cardinals he faced.

Meanwhile, Detmers was a bit off his feed, which seemed a bad omen against the hard hitting ECU lineup, featuring six .300+ batters and a couple of guys with homer totals well into the teens. Despite struggling a might, he was able to get out of the 1st, stranding two visitors. The Pirates were three up three down in the 2d, but threatened hugely in the the 3d. (Yeah, I used the word “hugely,” deal with it.)

After a Detmers’ wild pitch, ECU had men on 2d & 3d with two down. Their prime basher C Jake Washer (.310, 17 HR, 55 RBI) worked the count to 3-2. In what in retrospect might have been the biggest pitch of the biggest AB of the afternoon, Detmers Ked Washer swinging.

The game turned in the bottom of the 4th. I mean, really, it took on a whole different tone from what looked like might be 1-0 nail biter. Logan Wyatt (2/4, 3 runs scored) doubled. Tyler Fitzgerald (4/5, 2RBIs, 4 runs scored) doubled Wyatt home for a 1-0 advantage.

Not only would the Cardinals not relinquish that lead, they started immediately to add distance between them and their AAC visitors. After Alex Binelas (2/4, 2 runs scored, 2RBIs) worked a four pitch walk, Jake Snider singled.

The bases were loaded, and First Team All-American Agnos’ knees were knocking when DH Danny Oriente (2/3, 3 RBI) stepped into the batter’s box. He proceeded to scorch a three run screamer past first base down the right field line, ending up at 2d. His three RBIs put the Cards up 4-0.

And it was only the beginning.

As the ol’ second time through the lineup thing was at work. For the Cardinals. Not for the Pirates.

Detmer shut down ECU in the next half inning, getting Alec Burleson swinging for the final out.

Agnos didn’t take the mound for the Cardinal 5th. The anschluss continued anyway. Three Pirate hurlers couldn’t contain U of L’s hitters. It was the proverbial bat around. A Fitzgerald single plated one. 5-0. A Snider double sent two more across. 7-0. Another Cardinal tally on what could have been an inning ending DP, but was a fielder’s choice instead. 8-0. Justin Lavey’s single knocked in the Cards’ final score of the inning. 9-0.

From that point on, the spitting sky didn’t seem like much of an annoyance for Louisville fans.

U of L scored three more in the 6th. And added another couple in the 7th. At which point, more than once did I hear folks in Cardinal gear muttering, “save some for tomorrow.”

Detmers settled in with the cushion provided by his mates. A sixth inning solo tater was the only real blemish, if that, on the Cardinal ace’s afternoon. 7 innings. That lone run. 5 hits. 6 Ks. A couple BBs.

Frosh Garrett Schmeltz finished it off, in his longest stint of the season. Two innings. Two meaningless hits and 3 strikeouts.

After a convoluted explanation of one set of changes, one wag in the press box asked, “Who’s on first?”

U of L’s output, huge as it was, didn’t come close to its runs scored record in the post season. In ’07, the Cards laid 20 on Okie State rampaging its way to an inaugural trip to the CWS.

ECU did something I’ve personally never seen before. The Pirates 3d base coach had a laminated play sheet of some sort, the kind of thing you see football coaches use.

He’d stare into the Card dugout. When the pitch was signaled to Card C Henry Davis, the coach would check his sheet, then signal any base runners.

If he was “stealing” U of L’s signals, good on him, good for them. It’s part of the game. Didn’t work. At least for Friday’s opener.