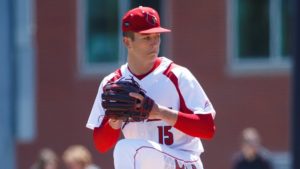 It is at somewhat incomprehensible moments like this, that the writer’s craft and focus run off and hide.

How to explain in an ebullient but professional way how your favorite school’s baseball team has just drawn and quartered the tenth best squad in the land by scores of 14-1 and 12 zed to be the first to punch a ticket to the College World Series.

What hook to use? Where to start? Does it really matter if you get the essentials and the peripherals onto the page.

. . . this morning, while cruising the interweb, before heading out to The Jim, I came across a mention of Peyton Manning. Who, as you might recall, used a barked “Omaha” as a trigger to his teammates that he was changing the call at the line of scrimmage.

So, should the Cards prevail, I thought I might start with that angle, and work from there, maybe talk about how the Cards pulled a Peyton Manning. Which the observant among you will notice I have done.

Then there’s the more obvious storyline, which if I weren’t such a contrarian, I would have put at the beginning of the lede.

Like, you know, pitching 8 innings of NO HIT baseball. In an incredibly efficient manner. Though I might be off a pitch or two, I believe the visitors’ first base knock came on Miller’s 92d delivery to the plate. He surrendered No Runs, and but that one wafer thin hit, a couple of walks, while striking out 5.

Miller retired East Carolina three up three down five times. Two other times, he only faced three batters, because his mates turned what we know as “the pitcher’s best friend,” double plays.

Or, we could dwell upon the timely and exuberant hitting by Cardinal batters. Like how the bottom third of the Cardinals’ order on Saturday had lines like these. RF Drew Campell: 3/3, 2 RBI, 3 runs scored. 2B Justin Lavey: 3/3, 3 RBI, 3 runs scored. C Henry Davis: 2/4, 2 RBI. Plus C Zeke Pinkham relieved his counterpart, knocking a pinch hit RBI single in the top of the 9th. CF Lucas Dunn also knocked in a couple scores.

More specifics on all that in a moment.

But, it seems in retrospect the most valuable person in this post season U of L turnaround — One Guy’s Opinion — is Ken Langford.

You will recall he’s the ump who tossed Card closer Michael McAvene for no reason really at the end of the IU game last Sunday. Louisville held on 9-7 in a must win situation. And, chip on their shoulders, the Cardinals, pissed that their mate was unjustifiably in exile, have for the most part been a different team at the plate and on the mound since.

So, it’s one guy’s opinion that Langford’s thin-skinned ejection was the catalyst for U of L’s surge to — Where Peyton? — that’s right. Omaha.

U of L kicked it in early. Drew Campbell stroked in two with none out yet in the top of the 2d. The good guys scored again on a wild pitch. 3-0.

Louisville took charge — and frankly broke the Pirates will — with another three spot in the 3d. Lavey with a two out, 2 RBI double and Davis with a run scoring single were the perps.

ECU hurlers surrendered lead off walks in both those innings. I’d mention their names, but Pirate coach Cliff Godwin, who walks like John Wayne heading into a gunfight, used six, and, truth be told, I lost track somewhere along the way. Not that it matters. None were able to cool off the Cards.

The Cardinals added three more in the 5th, to essentially seal the deal. But added another three in the 9th, those with two gone. Just to make sure the Pirates understood completely who was in control of the ship.

Were Miller to complete that No No, you’d have heard another old fart remembrance of a famous no-hitter in Louisville from yesteryear.

Back when the local AAA team was still the Colonels, and having moved from Parkway Field to the Fairgrounds, a hurler named Juan Pizzaro pitched a no-hitter.

What makes it so memorable is that there was some free ticket giveaway that night and the stands were jammed. Of course, half of our burg’s baseball population alive then now claim to have been in the house. I was not. But I did listen to the end of the game on the radio.

Whenever it comes up in conversation, everyone else at the table claims to have been there.

And if a trip to the CWS secured, shutting down East Carolina’s bats with boffo pitching, and outscoring the Pirates 26-1 weren’t enough, I got a special package in the mail when I returned home. It was the cherry and whipped cream on top of the sundae.

From my old pal Bill, a t-shirt with an image of a Don Mossi baseball card on the front.

There’s a great back story to this garment, too long to relate here, but you can read about it — and you should — here.