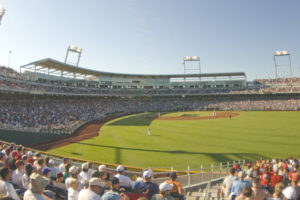 The College World Series draw can be a cruel mistress.

Win the opener and the possibilities for success multiply. Drop the first one, and matters get dire.

In an opener, which is the only one to feature two national seeds, between college baseball’s winningest squads this decade, Vandy the higher-seeded favorite, in this game and to win the title, prevailed. 3-1.

Louisville will face the Auburn/ Mississippi loser Tuesday afternoon. Defeated departs. Winner gets life, but will still have to win three more in a row to advance to the title 2 of 3.

While falling to the Commodores doesn’t feel good, it’s no disgrace. U of L’s very familiar regional rival was ranked either #1 or #2 in all the pre-season polls. Vanderbilt finished #2 in all the polls, behind UCLA, which was swept in its Supers by the surging Michigan Wolverines.

Vandy’s ascendency into the sport’s upper echelon pretty much parallels U of L’s. But the Nashvillians have fared significantly better in their four CWS appearances than U of L’s now 2-9 record in five. They won it all in ’14, winning the opener against U of L, and were runners up the following season. Vandy’s harvested the highest rated recruiting class four of the last five seasons.

The ‘Dores 55 Ws are the most in the land this season.

Right fielder JJ Bledey leads the nation in homers with 26.

Leadoff third sacker Austin Martin came into Sunday’s matchup, batting .410. But, at least for the day, he grabbed the slugger’s mantle from his mate. He jacked Reid Detmers first pitch over the left field wall. In the bottom of the 7th, with a man on second, he parked it again in the bleachers behind Jake Snider.

Those three runs were all the Commodores needed.

Louisville’s bats finally came alive in the top of the 5th. Justin Lavey tagged a one out double down the 3d base line. Henry Davis singled him home to knot the game at 1-1. Two more singles and Louisville had the bases full with one out.

But the Cards only real rally opportunity petered out with a foul pop out and ground out. U of L only had four scattered base runners the rest of the way.

Yet, after surrendering that first pitch homer, he only gave up two more hits in his next 100 throws, before being pulled after 5 1/3. He walked far and away a season high six, and struck out but five. But, with guts and guile, he kept his mates in the game.

Mettle and a stronger showing from the bullpen prevailed.

Though it happens less in baseball than in other major sports, given the vagaries of the game, the best team won.