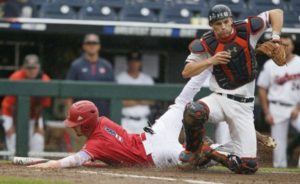 The Cards will meet the vanquished of Mississippi State/ Vanderbilt Thursday evening.

U of L, with a 4-1 lead, endured a 20:07 rain delay before action resumed in the top of the 5th at 11:00 AM Omaha time Wednesday. In front of a “crowd” at first pitch you could count on fingers and toes, both the Cardinals and Tigers sleep walked through 2 1/2 innings before any energy sparked.

Given how well Adam Elliott was pitching, Dan McDonnell yet again made one of his patented curious post season pitching decisions, bringing in ace reliever Michael McAvene to hurl the top of the 7th. The Cards closer certainly needed to knock off some rust. Following his suspension during the regional, two laughers over East Carolina when he wasn’t needed and a DNP in the CWS opening L to Vandy, he hadn’t taken the mound since June 2.

But Elliott was on, and surely could have gone another inning at least.

After making short work of the first two Tigers he faced, McAvene gave up a single and RBI double and U of L’s lead was narrowed to 4-2.

Energized by a lead off walk in their top half of the 8th, Louisville got a seeing eye single bouncer through the middle from Danny Oriente. Drew Campbell hit an RBI one bagger to left to earn back the run surrendered.

But the opportunity for more insurance was squandered, with runners on 1st and 2d and none away. A blown bunt attempt was pop fouled for out #1. Being overly aggressive, designated pinch runner Trey Leonard was picked off 2d for out #2. Henry Davis struck out swinging to extinguish the Cards’ potential tension-relieving rally.

Auburn proved in its half of the 8th why it finished the season but ten games over .500.

McAvene whose legendary heater couldn’t find its spots walked the lead off hitter on four pitches. Fortunately his best friend then showed up. A 4-6-3 double play and two were gone, but the inning was far from over. Three consecutive singles. The bases were full, and reeling McAvene had already tossed 35 pitches when Judd Ward came to the plate, proceeding to work the count to 3-2.

McAvene’s 41st and last pitch of the battle was a swinging strike, ending the fraught inning.

The importance of Auburn’s ineffectiveness in the 8th was underscored in the 9th. Conor Davis homered off Michael Kirian, who came in to close, cutting the Cardinals’ advantage to 5-3. A Steven Williams double gave the Tigers hope, but Kirian got Rankin Woley swinging to end the game.

But, an inning later, he executed the play of the game, gunning down what looked like it would be a game-leading run at the plate on a perfect peg. The 7-2 out kept the score from 2-1 Auburn. Campbell’s RBI single provided more than a little insurance.

As Tuesday’s rain started to come down a little harder, the Cards tallied 3 in the top of the 4th. Reliever Elliott Anderson walked in the go ahead run with only one out.

Luck — for the Cards that is — prevailed. Auburn’s 2B Ryan Bliss booted what should have been an inning-ending, rally-quenching grounder off Lucas Dunn’s bat. Two Cards crossed the plate. Heads up base running.

Even though just one more hit would have broken Auburn’s will, the Cards led 4-1, which is how the game stood overnight after it was suspended due to inclemency.

So, the Cardinals, still not the juggernaut that  won three in a row to capture the Regional, and then plundered East Carolina, were lucky and did just enough to move on.

Louisville is now 41-1 in the post season, when scoring five or more runs.

I love Chris Burke and Ben McDonald in the TV booth.

These guys are baseball geeks, with the ability to share the nuance and technicalities of the game in a way that is both engaging and illuminating.

Except for the occasional foray into describing snoballs — surely foisted upon them by ESPN’s producers — they are in the game and enhance the viewing experience. Love the half inning when they went on at length, with visuals, explaining a batter’s optimal hand placement.