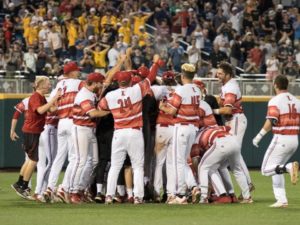 Sometimes you eat the bear. Sometimes the bear eats you.

Prior to Thursday night’s season-saving, Final Four-elevating 4-3 walk off by the Louisville Cardinals, 28 of the 52 victories in 2019 by the heading back to Dudy Noble Field Mississippi State Bulldogs have been of the come from behind variety.

In a little tit for tat, the Cards ended the season of their former assistant coach’s nine By. Coming. From. Behind.

As the number of the trailing, lifeless at the plate Cardinals’ outs was diminishing, the way too glib announcing team of Kyle Peterson, Eduardo Perez and Karl Ravech started hypothesizing about Bulldog/ Commodore pitching matchups for Friday night.

They weren’t the only ones who thought the game had a fait accompli feel to it.

In the top of the 7th, even before Tanner Allen’s “insurance” RBI single gave State a 3-0 lead, I — yeah me, ever the pessimist — texted my pal and declared, “This season is over.”

Energized by the bugaboo of college baseball, a lead off walk, the Cards started to stir, and tallied two in the bottom of the 7th. Alex Binelas followed Tyler Fitzgerald’s base on balls with one of his own. Both worked reliever Jared Liebelt to 3 & 2 counts.

“A walk’s as good as a hit.” Isn’t that one of the first things we learned in Little League?

Jake Snider loaded the bases with an infield single. Drew Campbell’s single to left got the Cardinals off the schneid. Justin Lavey’s bouncer toward the second sacker was bobbled and another run crossed the plate on a fielder’s choice, which should have been a DP.

Jared Poland held the Bulldogs in check for 1 1/3 with four strikeouts.

Reid Detmers — yes, we’re talking the Cards Friday Night Ace — was called on by Dan McDonnell to close out the top of the ninth. He essentially picked off the SEC’s all-time hits leader Jake Mangum.

(At some point just before that development and the Cards comeback, while organizing my notes for this exposition, I made note of U of L’s three major base running gaffes in the 2d, 3d and 8th, with the intention of blaming those mistakes for the “inevitable” U of L loss. I’d be remiss if I didn’t mention the irony that it was that Bulldog base running mistake that ended their 9th, and State’s chances to increase their advantage.)

Silly me. ‘Cause you know what Yogi said.

The Cards prevailed without even using another of their three available outs.

Dependable Jake Snider walked on a 3-2 pitch to open the bottom of the 9th, then stole 2d on a bungled pick off attempt. Danny Oriente singled him home to tie the game at 3. Drew Campbell — U of L’s CWS MVP so far — singled him across the plate for the game winner in the biggest win in program history.

(Did you notice the satisfied smile on Campbell’s face as he watched his drive toward the outfield gap?)

Louisville has now won multipele games in a CWS for the first time in school history.

I believe it was only U of L’s second W of the season, when trailing going into the 9th.

Bryan Hoeing and Garrett Schmelt along with Poland gave the Cards’ some solid relief to hold the Bulldogs in check, until Louisville came to life at the plate.

I mentioned the ESPN announcers above. This trio is the network’s “first team” for the CWS.

Which is OK I suppose if you want to watch the game with three guys who obviously know the game, but have spent so much time together all they do is give each other shit.

In my post about the Auburn game, I lauded Ben McDonald and Chris Burke for their geekiness, how they went into detail about Logan Wyatt’s hitting mechanics, and how those had been tweaked during the rain suspension.

Last night’s crew broached the exact same subject. Except they hadn’t done their homework, and didn’t know what had been worked on.

2 thoughts on “Reflections on a U of L Walk Off”