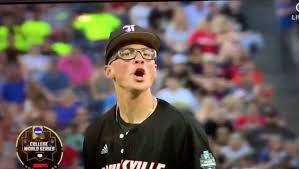 There was, as any sad U of L Cardinal fan understands, a consensus. A healthy consensus, and almost universal belief.

That Luke Smith, who again hurled brilliantly in this 2019 post season — three hits, none after the 3d, ten strikeouts, but one walk, and a single score on 106 pitches — should have been pulled after those eight masterful innings.

Should have been pulled because his competitive bile at the end of that half inning — hurling antagonistic invective toward the Vandy dugout and Julian Infante whom he’d just struck out — could well awaken the beast that is Vanderbilt. Should have been pulled because the Cardinals have not one but two shutdown closers. Michael McAvene with his 5/1 K/BB ratio and 7 saves. Michael Kirian with his 1.68 ERA, 4/1 K/BB ratio and 5 saves.

Or, at the very least, pulled in the 9th after walking JJ Bleday, the nation’s best basher, on five pitches, after getting leadoff Austin Martin to ground out to start the Commodore half.

That consensus however does not include Dan McDonnell, the successful Louisville mentor, who has turned the Cardinals into a national baseball power.

McDonnell, with a look on his face that was kind of difficult to comprehend — it looked like indecision mostly — stayed with his starter. (One of the advantages of good TV coverage, are those close ups in those tense situations.)

I, like most, think it was, at the time, and in retrospect, an egregiously wrong choice. You gotta trust your closers.

But Smith stayed on the mound.

Ethan Paul proceeded to knock a 2-0 double down the right field line, scoring Bleday with the tying run.

McDonnell then acted, replacing Smith with his ace closer McAvene.

Who, it must be remembered, immediately surrendered a single to Philip Clarke on a 1-1 pitch. With runners then at the corners, Pat DeMarco blasted an 0-2 McAvene delivery past Alex Binelas down the left line, recapturing the lead Vandy had held from the 3d through the Cards rally in their half of the 7th.

McAvene held the ‘Dores in check, closing out the inning with no further damage.

In the last half inning, against Vandy’s shutdown closer Tyler Brown, the Cards couldn’t capitalize on Drew Campbell’s one out double.

So, yeah, it was easy at the time to wonder why Dan McDonnell stayed with Smith.

And, it is easy with hindsight to believe if he’d have simply pulled Smith, the Cards would be back on the field this Saturday for yet one more elimination battle.

But, ya know, ya never know.

None of us has been hanging with those players day in and day out through the season and the off season. None of us knows the true nature of their personalities, information that their coach does indeed possess, and we must assume, was part of his calculations at the moment.

(Take Luke Smith’s personality for example. His competitive fire and cocky, almost dismissive attitude was a revelation. I mean, after each K late, with a flick of his wrist, he’d shoo away a batter he’d just struck out. Who knew?)

Plus there’s this reality: McAvene wasn’t really up to the moment. He surrendered hits to the first two hitters he faced.

U of L was indeed resilient also.

In the bottom of the 7th, after Trey Leonard, who should have held or been held, was thrown out at the plate on an infield grounder, the Cards forged ahead. Henry Davis singled. Justin Lavey who was on the bases thanks to the fielder’s choice when Leonard was tagged, scored on a bad pick off throw. Lucas Dunn’s single scored Davis.

Though U of L came up short, it was the last hurrah of a hurrah-worthy season.