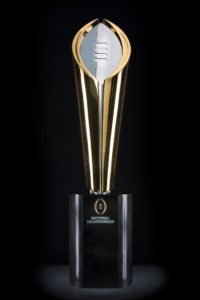 Yeah, that’s right, my fellow chinstrappers, it’s time to thaw out the brats and get ready for some pigskin. Week 0 is upon us.

(And, whether you like Johnsonville or Usinger’s or some other Best in Brats wannabe, my go to guy when it comes to processed oink in a tube — that would be Badger Billy — advises to feed those to your schnauzer, even if his name is Johnny U. The only way to go, says he, is Miesfeld’s in Sheboygan. That’s in Wisconsin. But they ship. Just sayin’. Either you care or you don’t.)

So much for tailgating advice.

Here’s what ‘s going to happen inside the stadia.

The probability of Clemson and Alabama meeting in the Final Four for the fourth year in a row is pretty much a given, but does not faze me one iota. I first became aware of baseball in the early 50s as a youth, and my dad had to explain to me why the Giants and Indians contested the Series in ’54. I thought the Dodgers and Yankees just played in it every year. Like, you know, Clemson and Alabama.

So I’m almost a bit excited for Swinney vs. Saban, Part Quatre. Though I would be even more pleased to see some upstart come from out of the blue to dazzle the pigskin planet next January.

So, to maintain even a modicum of props, to underscore that I have at least partially a clue what I’m talking about, I’m predicting the Tide and Tigers will perform as expected and make it to the semis. I learned my lesson. Mea culpa. I’m sure none of you remember that I didn’t pick Alabama last year, giving way too much weight to coaching changeover and untested secondary in Tuscaloosa.

Burned once, shame on me burned twice etc, etc, etc.

Anyway, here are the four teams that will have our attention after we’ve savored the hors d’oeuvres of the First Responder Bowl, Gasparilla Bowl and Quick Lane Bowl.

Clemson. Remember the term “Clemsoning?” It kind of seems like so very long ago when it was a thing. A highly rated team continually losing to a lesser light. Guess it might mean something else now.

Can the meaning of a word totally reverse itself?  Can I get an etymologist?

Truth is there have been some long held deep seated traditions at the reigning national championship school. Howard’s Rock. I.P.T.A.Y. “The most exciting 25 seconds in college football.”

Even with the greatest D line ever gone, Dabo’s still got Tee Higgins and Travis Etienne and that guy at QB who could really use a haircut, Trevor Lawrence. And they’re playing behind some hosses up front. Plus there are a plethora of big uns to replace those four draftpicked DLs.

The Tigers face a schedule that reads “BCS.” Weeks off before Florida State and a trip to rival South Carolina. Only one other arguably tough road game at Syracuse.

It’s hard to see Clemson tripping itself up along the way. That’s just the way it is.

Alabama. Have I mentioned before how I’m long past tired of talking about the Crimson Tide? I mean, how many different ways can one parse a Steely Dan tune?

So, instead, let me bring you up to date on He Who Would Claim To Be The World’s Biggest Bama Fan. Even if he now resides, with his 100 or so houndstooth ballcaps, in Louisiana.

That would be on Harvey Updyke Jr. He’s the rabid Tide supporter, you may recall, who poisoned the trees in Toomer’s Corner, where arch rival Auburn fans celebrate Ws by toilet papering said arboreal edifices. Which they couldn’t do after Harvey in a fit killed ’em all.

Updyke pled guilty to a Class C felony in March, 2013. His court ordered restitution and court fees totaled $816,694.98. Payable to the Lee County, Alabama clerk at the rate of $200/month.

DA Brandon Hughes is on the case, and subpoenaed Updyke to appear in court. Only his lawyers showed. Now Harvey’s got to show up himself on another court date on October 30.

By which time, the Tide will likely be 8-0, with a week off before LSU visits Tuscaloosa. Which game Defendant Updyke might have to view in the Lee County Jail lounge.

Why will Alabama be top shelf again. Two names: Tua and Jeudy. I can’t bring myself to delve any further.

Oregon. Those of you who have paid even the least bit of attention to my pigskin meanderings in the last decade or so will recognize how smitten I have been and continue to be with the Quack. A traditionalist by nature when it comes to unis, I fell for the psychedelic potpourri of haberdashery that the folks at Nike wrapped around the shoulder pads of founder Phil Knight’s alma mammy. From such flimsy affections, adoration ensues.

Plus Chip Kelly had it going, and the ascendency peaked under Mark Helfrich when the Ducks made it all the way to the final game after the ’14 campaign. That mentor was fired following the next less than stellar season, after which peripatetic Willie Taggert stopped off in Eugene for a cup o’ joe before movin’ on. But the ship seems righted under Mario Cristobal. Last campaign, the Quack fell twice at home in OT to the Cardinal and the Huskies, but finished the season somewhat positively with snoozer of a 7-6 W over Sparty in something called the Redbox Bowl.

Another sure sign of resurgence is the signing of the nation’s #1 recruit, DE Kayvon Thibodeaux, who surprisingly hails from L A not Plaquemine, LA, and has to be the first P5 pigskinner with that surname not to play for LSU.

So, after going chalk with the Tide and Tigers, the Quack are my first outlier dark horse for the playoffs. We’ll know whether I’m an idiot or savant by midnight on September 21. Unless the Ducks’ visit to Stanford that day is scheduled for one of those newfangled coffee and Danish, made for TV exposure breakfast PAC12 kickoffs in Palo Alto, which will advance the reveal to sundown. Oregon opens with Auburn in JerryWorld. After those two battles and tussles with Nevada and Montana, you will be able to laud my prescience, or reiterate your belief I’m an idiot. Take the former.

In Justin Herbert, I believe. All Name DB Ugochukwu Amadi is gone, but I still believe.

Besides the PAC12’s gotta jump back into the Final Four sometime, right? Right?

Penn State. Which absurd choice I present because: 1) Michigan is the trendy pick to be the most upwardly mobile of contenders, and I simply can’t abide that Harbaugh crank who coaches them; and 2) It feels like a year that the Big Ten will have a team in the last four standing, and Ohio State has a rookie coach, and we’re all tired of hearing about them too, right?; and 3) I am so sure my readers will have long forgotten this predictions when the Select Committee chooses the Final Four.

Of course, I am totally ignoring the fact that QB Trace McSorley is gone. And that heir apparent Tommy Stevens for some odd reason transferred away. And whoever is receiving the snap for the Nittany Lions will be an absolute neophyte.

But there shall be D in State College. State led the nation last year is sacks per game, and was fourth in tackles for loss. The main dudes battling on that side of the ball are back.

But that’s my story and I’m stickin’ to it.