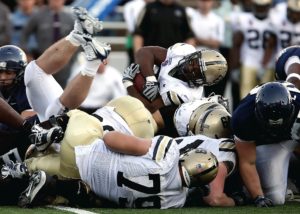 On the morning of an autumn day of the week traditionally set aside for looking back at the weekend’s pigskin results and their ramifications, there are still twelve hours and nineteen minutes until my team the Louisville Cardinals kick off.

The Notre Dame Knute Rocknes are in town, and the Ghost of the Gipper hovers.

The Era of Scott Satterfield beckons.

The ACCN’s inside look at U of L football was given short shrift during its first showing Sunday night. It started late because of a soccer game, and those in charge felt compelled to cut off the ending so a replay of Boise State’s comeback against Willie Taggert’s Seminoles could start on time.

The doc, featuring a passionate Good Ol’ Boy pep talk by LB coach Dale Jones, as well as a cameo shot of yours truly at the Media Day presser, is on again today, at, I believe, 1:00 and 7:00. Check the listings to make sure.

To kill at least some of the time until kickoff, let’s consider a few takeaways from Week I.

The most startling and most enjoyable game of the weekend was Georgia State’s takedown of Tennessee. I happened to turn it on in the 4th Q, when the Panthers were pounding the Vols into submission. There was something odd about the telecast, which I couldn’t immediately put my finger on.

Then it came clear. I hadn’t heard a single rendition of “Rocky Top.” Such sweet silence.

“At one point during Georgia State’s preseason camp, Elliott decided his players needed to hear Rocky Top several hundred times. He wanted them so burnt out on the song that they’d do anything to keep Tennessee’s band from playing it on gameday. The only problem? Elliott got tired of it, too. “We played it for about two days straight,” Elliott says. “To tell you the truth, I got sick of hearing it. I cut it off, and then as we got into game week, I said ‘All right, let’s cut that thing back on. Let’s kick it up a notch.’ ”

U of L fans are looking for anything whatsoever to give them hope that something magical might happen tonight at Cardinal Stadium. Well, here’s a takeaway from that upset in Knoxville.

Like U of L, the Panthers won but twice last season. Like U of L coach Scott Satterfield, the Panthers head coach Shawn Elliott, as well as OC Brad Glenn, were on the App State staff in ’07, when they felled the Wolverines in the Big House.

Brohm is now 13-14 during his stay at West Lafayette.

Offensive savant that the former Trinity and Cardinal QB is, he is hopefully learning that to be successful continuously at the P5 level, your team has to play D. He is not in Bowling Green anymore.

Proving yet again, as if we need anymore evidence, that college football overtimes are as exciting as anything in sports.

Rookie QBs were also a story.

Oh yeah, Bo Nix was personally responsible for the toiletpapering of Toomer’s Corner.

Which led too many announcers to intone, “Think about it, just last year, (Insert Nix or Howell or Bachmeier) was playing in front of a few hundred at Samuel L Jackson High School.”

I watched way too much college football over the weekend — It’s what I do — and realized I did not see one targeting situation.

Other than in a highlight on the interweb, watching a Northwestern  Wildcat give a vicious and intentional forearm shiver to Stanford QB KJ Costello, who was already on the turf. No penalty was called.

OK, now there’s only eleven hours and two minutes until kickoff to kill.

Tailgating starts at, ahem, noon. To those arriving at a more reasonable hour, beware of flying Falls City cans.