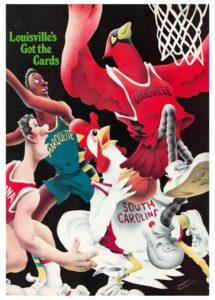 The above image of the Sports Illustrated ’74-’75 preseason basketball issue heralds that season’s projected #1 Louisville Cardinals, who were honored at halftime of Saturday afternoon’s victory over Clemson. (At least until we get a Cease and Desist order from SI’s attorneys, and have to remove it.)

During his Friday pregame press conference, Chris Mack spent a majority of the opening moments extolling the virtues of the Tigers’ playmaking pivot Aamir Simms, emphasizing what a rigorous matchup problem the undersized center would be.

At 14.4 ppg coming in to Saturday afternoon’s battle in the Yum!, Simms leads Clemson in scoring. Same for rebounding at 7.7 rpg. While dishing out two and half assists a game, many when stationed out high and hitting backdoor cutters and guys off slip screens.

Mack’s concern was palpable and legit. He indicated it was going to have to be heady, mature, knowing defense that might thwart Simms.

Then he was asked the status of Malik Williams, who tweaked a knee in the Georgia Tech win, and advised the Cards’ energizer big was “day to day.”

At which point, I asked, if it would be fair to assume Aidan Igehan might see more action than he has recently, if Williams wasn’t available?

When asked a question he deems less than astute, Mack is inclined to be as prickly as his notorious predecessor. Glaring through me, he first advised, I “could assume anything I want.” Then, with a tone that asked, “Weren’t you listening to what I just said?,” he advised, that sure the frosh pivot “might” play, but with a tone that underscored, “Uh, no, I think we’ll play fellows ready for the rigors of midseason ACC competition.”

Yes, Chris Mack and staff were concerned with Aamir Simms, and the troubles he could cause U of L. Especially if Malik Williams wasn’t 100% or a DNP.

So let’s start with the Cardinal mentor’s marvelous game plan. And the Cardinals full 40 energetic execution of same. Tiger backdoors and slip screens were few and far between.

Thanks to hot shooting, lock down D, maximum effort, and a 20 nil run early on that pushed U of L’s advantage from 11-9 to 31-9, the steamrolling Cardinals were in total command and up 47-26 at the break.

Heading to the locker room, Simms was 0/4 from the field, and had grabbed only 2 rebounds.

Clemson’s other average double figure scorer, Alabama transfer Tevin Mack, was 1/6 from the field before halftime.

It was easily Louisville’s best and most complete twenty minutes of the campaign.

You know a team is in control when the fans get ootzy and there’s mumbling and grumbling when a once 26 point advantage is cut to 17, as it was after a Tiger triple with only 5:53 to play.

The Cardinal cushion had been fashioned with a better than it has been lately beginning to the 2d. U of L actually increased the margin, +1,  during the critical first five possessions after play resumed.

Then U of L went cold, coughed it up a few times, and the visitors attempted a crawl back, as futile as it eventually proved to be.

The Tigers actually clawed within 13, 72-59 at 3:21. Visions of their comeback last year ensued. The one, you might recall, when the Cardinals escaped only after a Tiger missed a short J at the buzzer.

But, bolstered by 14/17 marksmanship at the charity stripe in the 2d, 5 treys, and continuing defensive stalwartitude, Louisville steadied, went with a short lineup late, prevailing in the end, 80-62.

Samuell Williamson delivered his best effort ever in his short Cardinal career. He tallied 14 on 5/6 shooting. (Actually he was 6/7, but the zebras, two of whom are Final Four caliber, whistled him somehow for an offensive foul, when drained a shot clock bomb with seconds to play in the 1st.)

That Sutton kid, first name Dwayne, once again did what he does: 8 points, 11 caroms.

In the 1st, DJ had 6 assists, 6 points, and 4 rebounds, while he — sing it with me, Cardinal fans — catalyzed the Cards.

He’s still learning and getting in shape and should be given some slack, yet I’d be remiss if I didn’t tsk tsk the errant showboating attempted windmill jam on a fastbreak, when he had wide open mates to his right and left. After all, I’ve called out other Cards for the transgression and fair is fair.

But, how about his reverse layup for a 37-16 margin, or that thirty foot fastbreak alley oop to Jordan Nwora for 40-18 lead. Or how he saved the ball and possession with hustle on the next trip. Etc, etc, etc. Etc, etc, etc . . .

Malik Williams did play. And reasonably well. But, given the Cards were never really threatened after that early 20-0 run, Mack sat him for all but 4:22 of the 2d.

My favorite Cardinal offensive sequence of the tilt was one that actually ended up for naught.

After Nwora’s fourth foul of the game, McMahon stole the inbounds pass and was fouled. No FTs. But, during the Cards’ offensive possession, they ran their patterns with the same admirable fluidity as they had all night. David Johnson ended up driving the ball into the lane, but was trapped, forcing him to throw a blind pass to the wing. Where Sutton had drifted exactly as and where he was supposed to.

Louisville, which at times has looked laborious with the rock this season, was executing with flair.

A lot of that, it says here, has to do with the emergence of Johnson and Williamson, one guy’s opinion the most talented players on the squad, thereby allowing Fresh Kimble and Perry and McMahon and Sutton to play with less pressure.

The ’75 team, Denny Crum’s second Final Four contingent, was honored at the half.

The season began with the thrill of that Sports Illustrated cover, dubbing U of L #1 in the land.

The Cards lost only twice during the regular season, at Bradley and at Tulsa.

The other game that sticks out from that regular season was the W over St. Louis at home. U of L played horribly, falling way behind the Billikens.

Lots of rumors about that one. My favorite, though it has long been debunked: At the half, Denny Crum was said to be so pissed at the team’s lame effort, he asked “Who really wants to play?,” and the first five who raised their hands would start the 2d. As the tale goes, Magic Johnson, then a HS senior, was on a recruiting trip here, and he was the first to raise his hand.

Apparently not true, but a great anecdote to the mythos of the Cardinals in the 70s and 80s.

The Cards beat #16 Rutgers in the NCAA opener. Then #12 Cincinnati and #4 Maryland in the Midwest Regional. The title hopes ended with Richard Washington’s baseline jumper in a national semi-final against #1 UCLA that the premier announcer of the day Curt Gowdy called the greatest game he’d ever seen.

I was in the gym that day in San Diego, and it stands as my saddest moment as a Cardinal fan.

Louisville finished the campaign with a victory over #6 Syracuse in the Consolation Game.

The immediate road ahead for this season’s Cardinals is filled with pot holes. At Boston College on Wednesday. At NC State next Saturday.