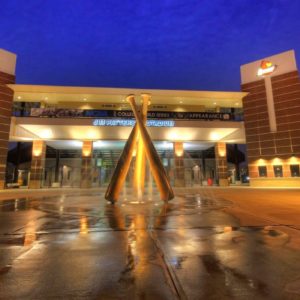 It is for me the most charming aspect of The Jim, where the Louisville Cardinal nine under normal circumstances spends spring evenings, whiling away at America’s pastime.

I’m not referring to the bucolic berm beyond the fence where a caught fly ball is marked 7 on your scorecard, the one where kids play tag and catch and push each other down the slope and sometimes pay attention to the game.

Nor the crossed Louisville Sluggers outside, a sign of our city’s significant contribution to  the the game.

I’m talking about the railroad tracks beyond the fence in right, where the screeching and whistling of commerce on wheels harkens back to that more pastoral time when baseball and traveling from sea to shining sea were new and adventurous.

A great lament for U of L athletics is what might have been for this season’s loaded baseball team? It’s certainly worthy of consideration, yet that’s not really what this is about.

In fact, mea culpa, the lede is a ruse of sorts, a way to hoodwink Glorious Editor of cardchronicle.com that this is within the parameters of the purpose of our fan site. As well as his bosses at the home office. It’s one of the sites where I double post these sports musings along with my vanity sports blog.

What this is really about is how for my generation — We were the war children/ Born 1945 —  baseball was the American imperative.

What this is really about is how the nature of the father/ son reality informed the national pastime.

What this is really about is the time when horsehide to leather and back again, pitch and catch, catch and pitch, father to son, son to father, was the metronome of our youth, the rhythm of our lives.

What this is really about is my relationship with The Commissioner.

A couple of things got me to musing about all this.

Surely one is a longing for nine at The Jim.

Then there’s Joe Posnanski’s incredible, indelible series “The Baseball 100” at theathletic.com, where he tells the tales — new and old — of baseball’s finest.

What has struck me time and again when savoring these delicious morsels is how so many of the great ones were influenced/ triggered/ fueled by their relationships with their dads. Or, lack thereof.

Which brings me to The Commissioner.

Some of my childhood pals called him that until the day he passed.

They started a Little League in the mid 50s at the Jewish Community Center exactly when I was at the right age for it. The kickoff was a Friday afternoon gathering to gauge interest, where they showed a newsreel of the previous year’s World Series.

A hundred or so boys. And one parent.

So, they named him Commissioner.

For some reason, lost in time, they gave every kid who played an ID Card, with their name printed on it. There at the bottom right, like Ford Frick’s signature on the official balls, it read, “Arthur A Kaplan, Commissioner.”

Oh, to have mine still to hold in my hand.

I was an OK player, a bit above average, I suppose. Wanted to be a pitcher or shortstop or centerfielder. But because I was — as we said back then — portly, and slow and never could track down flies or get the ball across the plate consistently or snag most grounders, I was a catcher.

To this day, I walk often by the yard in front of the apartment building, where my dad and I played pitch and catch most every night in warm weather. There I was the one on the mound, he, behind the plate.

He’d tell me tales of the great ones he’d met. Double XX. The Babe.

You see, my maternal grandfather owned a fruit and vegetable stand right outside the visitors clubhouse door at Briggs Stadium, actually Navin Field when my father helped out gramps, later Tigers Stadium.

Somehow he knew the PA announcer for the Colonels at Parkway Field, and once a season we went and got to sit by his side. Which wasn’t in the press box, but in small cubby hole next to the dugout at field level. Once the fellow asked me if a play was a hit or an error?. I wore the honor like a badge with my pals.

We had lots of autographed baseballs, which I, against dad’s admonition, would sometimes take out to play with in the park. Silly silly me. (Though to be honest, dad had scotch taped over the signatures to “preserve” them, and they all were smeared anyway.)

Besides he was so busy, hearing complaints from other parents whose kids weren’t playing enough or weren’t in their best position, he rarely had time to watch me play.

How I loved the games. Tuesday evenings. Sunday afternoons.

When school was in still in session, I’d wear my Indians uniform from first thing in the morning, stare out the school window at the clouds, praying it didn’t rain, so the games would not have to be called.

It’s Friday the 17th. The Cards should be opening a series in Miami tonight. On ACC Network.

And, sigh, after reading Posnanski’s tributes, and his stories about father/ son dynamics, and having these memories washing over me, I’m just really missing The Commissioner right now.

4 thoughts on “Dads/ Sons/ Baseball: An Essay for My Father”