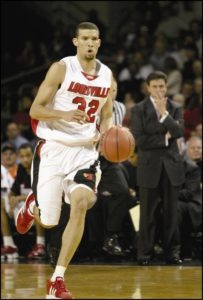 A quick explanation here at the starting line.

This series won’t really be about great or even gruesome incidents on the hardwood. Though such might creep into the dialog from time to time.

What it shall be about are those peripheral memories diehards cherish.

The term fan comes from fanatic, you know, indicating excessive and unabated zeal. The Latin derivation also includes a nod to divine inspiration.

Which any Cardinal fan should agree with, having experienced a moment when Wes Unseld would snatch the ball off the boards, turn in mid air and hurl it overhanded to Butch Beard at midcourt before landing. It’s a unique, oft mentioned talent that remains the gold standard still, decades after Westley’s retirement.

This series will be about memories, scenarios apart from action on the court. Stuff we remember, and rehash often, fostered by our fandom.

Francisco Garcia and Taquan Dean were a match.

To say their lives before and after donning the red & black were hard scrabble is understatement.

Dean — whose name is now Taqwa Pinero, a story is too long to tell, hardly had parents when growing up. Mother died when he was six. Father, if he was his father, in prison. Custodial aunt disappeared.

You get the picture.

Garcia’s early years were spent in his native Dominican Republic. His brother was shot and killed while he was a Cardinal.

It’s easy to understand why the two bonded.

There have been various stories about how Rick Pitino ended up with the twosome, even though, as it is said, he’d never recruited them.

My favorite: Sonny Vaccaro. Express Overnight Delivery. The back story being he owed Don Pitino a favor or something.

They remain two of mine. One moment Gorillalued™ it.

When Pitino first arrived at U of L, the Cards practiced in Cardinal Arena, there on Floyd Street across from the softball stadium. So bereft were the school of facilities at the time, he’d hold press conferences with a makeshift setup in the barren lobby of the Arena.

Waiting for one such dog and pony show to commence, I heard basketballs bouncing down in the gym. Looking through the locked doors, I could see Dean and Garcia hoisting up shot after shot. At, like, 10:00 in the morning.

They were gym rats. And it showed on the court. They led the Cards to Pitino’s first Final Four at Louisville. I remain of the opinion that, over the course of his career, Dean made more crunch time circumstantial treys than any Cardinal ever.

But, there’s an infinitesimal Francisco moment that always makes me smile.

During a game at Freedom Hall, he did something that obviously pissed off his coach, who yanked him.

The always immaculately haberdahered Pitino was dressing down Garcia before he could even get to a seat.

When Francisco reached over and straightened The Rick’s tie.

Brad Evans was a character.

It was never very clear why he wasn’t welcome at Wofford anymore, from where he transferred to play for Frank Camp at U of L.

But he had. Since Louisville was still municipal and small at the time, it wasn’t long, given his personality, before he became a factor on campus.

If not before, surely when school prexy Philip Davidson was pondering cutting football. Brad led the protest march to the Thinker.

Brad was what we call a man’s man. When I met him for lunch at the original Cunningham’s when he was passing through town years after we were out of school, he prefaced the eating portion with three boilermakers.

He was working on a barge at the time, a most Hemingwayish endeavor.

Brad was a literate and articulate and controversial conversationalist.

Brad was ever the provocateur. And he wasn’t averse to participation in occasional fisticuffs.

That was one of the things he had in common with teammate Mickey Settle.

Which brings us to ’66-’67 basketball team, specifically the #2 ranked Cardinals first L of the season.

Which came at the hands of Jack Hartman-coached Southern Illinois, led by a boffo guard tandem of Dick Garrett and smooth, dapper Clyde Frazier. In Carbondale.

The Salukis were a DII team,  then called the College Division. But they were really good. Upper echelon good. Such that they skipped the DII NCAA tourney, and won the NIT, whipping Al McGuire’s Marquette Warriors by 15 for the title.

I’m not sure how U of L came to be playing them home and home that campaign? The schools have only met but a handful of times through the decades. But they indeed competed twice that year, with Louisville surviving the first meeting at Freedom Hall in December in double OT, 70-66.

The return match came a month and a day later.

A lot of Cardinal fans made the trip, even though it was a midweek game in the middle of winter. We were jammed into endzone bleachers at the home team’s packed field house (10,104 to be exact).

Though the home team led the whole way, the game was taut. When Frazier had to sit with foul trouble late, the Cardinals pulled within a digit, but could never grab the lead.

The already rabid Southern Illinois crowd was spurred on the entire night by a cheerleading PA announcer, who out of timeouts would shriek, “Let’s bring the Salukis back on the court!!!!”

None of which sat very well with Brad Evans. Or his sidekick.

Over and over again.

Immediately after the buzzer, a brouhaha ensued.

Some fans went to help their team cut down the nets.

Most of them, especially the students, surrounded the U of L section, and with Ralph Steadman eyes hurled invective toward the Cardinal fans, especially in the direction Evans and his runnin’ podner Settle.

But, frankly, none of us felt especially safe from the rabble. Rabid is a most apt descriptor of the Saluki fans.

At some point a few gendarmes, school or city, I don’t remember, came and cleared a path for us. The uniform close by my pals and me, advised we scurry to our vehicle and get to the county line ASAP.

It wasn’t a great night to be a Cardinal fan. Especially with a forlorn four hour trip home.

But the memory is indelible.

Louisville fell only one more time, to Cincy, before the ’66-’67 season took a dive at the end. The Cards lost their last three.

You didn’t think I’d end this episode with an L, did ya?

Standing on a chair. Leading the C A R D S cheer.

One thought on “Cardinal Fan’s Hoops Moments I: The Carbondale Escort & Francisco on Fashion”