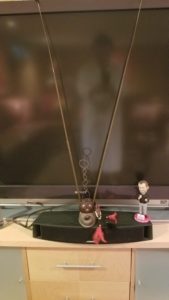 We’ve all got our own superstitions, our own manner of coping when our favorite team is playing. Especially when a game isn’t going well.

Here’s the tale of one of mine that’s worked pretty well at some critical times.

In the early 70s, there was a Missouri Valley away game against Wichita State I watched with friends, all Cardinal faithful, but not my usual gang.

The Cards were behind at the half. During that intermission, we filled our plates and cups, returning to the TV room for second half action.

The Shockers made a run out of the break, took the lead and pulled away a bit. The room turned tense, uncomfortable.

During the first timeout, our host realized that not all of us were sitting in the same seat as in the 1st half. Also somebody had turned off a lamp to avoid some glare on the screen.

He immediately implored, no demanded, we move to our original places, and that the light be turned back on.

Being Cardinal acolytes all, we realized the importance of doing our part, providing 110% spirit force to best help will U of L to victory. It worked. We moved to our original seating. Light on. Louisville came back, prevailed 91-84.

Like the diehards of every team and school, we have our quirky manner of dealing with such situations. Mojos. Talismans. Magic trinkets. Victory garb. Chants. Invocations.

For some rebellious reason, I wore a black shirt to the UCLA semi-final in San Diego in ’75. (Black, along with red, is one of the school’s official colors, I justified to myself.)

After that setback I vowed never to wear a black shirt again during a Cardinal game. And haven’t.

At some point in the late 90s or early 00s, my pals Dough and Mae got the first big screen TV amongst our crew. 60 inches, which was huge at the time. They turned their basement into a stadium of sorts. Lots of seating, etc.

So, it became our gathering place for football and basketball away games.

There was the big TV. The seating. The camaraderie.

But at some point we realized we didn’t have anything to aid the Cards kick it up a notch when they needed our help.

There was maybe a Rick Pitino bobblehead, which we’d set on the floor in front of the TV. But it really wasn’t working.

The NCAA L to Darnell Archey and Butler. The first round loss the following season to Xavier.

We needed something, anything, that could send our collective energy to the Cardinals, so we could do our part to aid them in prevailing. Some sort of device that would allow us to direct our energy when they were on the road without us in the gym.

It became a mission for me. I’m a fellow who can obsess.

Soon enough in an antique store along Bardstown Road, I discovered a classic rabbit ears TV antennae. The kind all in our group, long in the tooth as we were then becoming, had in our homes as kids.

A voice — the specter of Charlie Tyra??? — told me I’d found what we needed.

Omnidirectional. Settings from 1 to 7, to be used depending on just how much aid the Cards might need in a given circumstance.

After proper benediction, imbuing it with the tradition of Peck Hickman and Westley Unseld, and even uneralded Cardinals of yore, like Vladimir Gastevich, it was installed in the HummelDome.

Installed midway through the ’04-’05 season, it early on proved worthy of its designation as the Cardinal Meter.

On my 60th birthday that February, we played Memphis State. The hosts and my future bride at the time surprised me with a repast of the ribs flown in from the Rendezvous.

More important, after losing by 17 at home to the rival Tigers, Louisville rolled in the rematch. Thanks to the presence of the Cardinal Meter.

Later that same campaign, in the finals of the C-USA tourney, again in Memphis, again against Memphis State.

And so it’s been. Remember that West Virginia regional final, the Pittsnoggle tilt that could have been a debacle?

That incredible comeback in the 2d against Syracuse in the Big East Tourney? Mae didn’t even take a vote, she cranked the Cardinal Meter to full warp capacity. Cards eventually rolled.

Remember when Louisville, seeking its third national title, fell behind in the 1st of the title tilt to Michigan?

That time, Mae inquired if we needed to crank up the Cardinal Meter?

So, we did. Not to full strength. After all, it was only the opening stanza.

To a setting of four, saving some mojo for later in case it might be necessary.

Which setting, I’ll remind you, is the number of treys that Luke Hancock drained immediately after. Trez’s slam. “And just like that, Louisville has the lead.”

OK, a couple of quickies:

The first time Rob Hickerson led the C A R D S cheer. And how it became a thing, especially during the halcyon days at Freedom Hall.

The first red out, when U of L fans hadn’t yet taken to wearing school colors to games.

Memphis State’s Fred Horton getting walked out of the arena in handcuffs, after losing it entirely during a Saturday afternoon game in the late 60s.

The one game the original Doctors of Dunk wore old timey M.D. shirts during warmups. A cool idea, but apparently so uncomfortable, they were never worn again.

The time when, as sports editor of the Atherton Aerial, I named run of the mill Cardinal pivot Judd Rothman, First Team All-American, as a poke to my school pals who were UK fans. Then I received a serious note from unsuspecting guys on the paper at DuPont Manual, questioning my perspective.