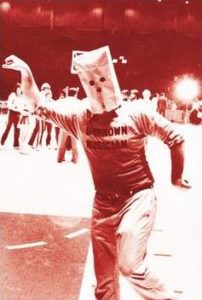 Here are excerpts from a winter 2005 piece I wrote after interviewing a fabled character from the greatest decade of Cardinal hoops, ’75-’86, a decade so abundant, the Cards cranked it to 11. Like, 10 years +1, get it?

(So I guess you could say I’m sorta plagiarizing myself.)

This would be the not so incredible but smile-inducing, true tale from those days of yesteryear when fandom was less scripted, more fun and wackoids ruled Freedom Hall. Fostered by the hard fact that Louisville’s Cardinals were the mack daddies of the college hoops universe.

So thank the bleak February heavens for Charlie Gabriel, with whom I had arranged an appointment for coffee. The married, fortysomething father, computer network consultant/job hunter living in Clifton, the brother of a broadcaster on the — egads! — UK radio network, was sunshine on a cloudy day.

In that magical season 25 years ago – a season when the Cards ruled with a thumbless power forward whose prosthesis was once retrieved from the garbage; during a campaign when U of L freaked out foes by setting up plays in pig Latin; when the Cards were champs so fresh that only a new gimme-some-skin five up high would do, Charlie Gabriel was also a pivotal player.

Ready or not, here comes the gory details of the origins, not only of the Unknown Musician, but of the C-A-R-D-S cheer and the roles of Earl Cox, “Wild” Bill Hagy and the pep band from Cincy.

Why the paper bag over the head:

Gabriel picks up the story from a time when Cox wrote for the Binghams and the high-flying Cards were known as the Doctors of Dunk: “I became the Unknown Musician the previous season. (’78- 79). The entire band had worn bags over our heads during a December game because (Cox) said the band should be ashamed of the way we played during opponents’ free throws.

“Some of our horn players blew a chromatic scale timed to the opponent’s dribble before a free throw. Cox called it ‘bush.’ So, for the next game, we called ourselves the ‘Doctors of Bush.’ We put some potted plants in front of the bandstand and wore bags on our heads in mock shame.”

Murray Langston was a comedian of the day. Known as the Unknown Comic, he gained notoriety on “The Gong Show,” a popular “reality game show” of the time hosted by self-alleged undercover CIA operative Chuck Barris.

“I kept wearing my bag for three years,” Gabriel says. “ I stole the idea from (Langston). … I still know all his stupid jokes.

“At first I had a T-shirt that said ‘Unknown Band’ on it. Then a buddy who worked at Allied Sporting Goods had one made up with ‘Unknown Musician’ on the front and a ‘?’ on the back.”

“The truth is, it was my ticket on the band’s bus for away games. I was a deadweight clarinet.”

UM on the origin of the C-A-R-D-S cheer:

“I’m sure we (Rob Hickerson, UM) both got it from the same place. From ‘Wild’ Bill Hagy. He was a Baltimore cabbie who spelled out O-R-I-O-L-E-S with his body.

“I led the C-A-R-D-S cheer only after we played the fight song. Hickerson kind of does his whenever he wants.”

Gabriel advises that the pep band would often travel into the enemy’s den for road games, particularly those against Cincinnati’s hated Bearcats right up the road. It turns out the game there during 1978-79 would become important the following season.

“Their band tagged their fight song by spelling B-E-A-R-C-A-T-S at the end,” Gabriel says. “We in the U of L band thought that was so cool we stole it. The next week we rehearsed a tag at the end of ‘Fight On U of L’ — C-A-R-D-S, C-A-R-D-S, GO CARDS GO! We rehearsed it two ways. With three quarter beats and two eighths. And two quarter beats and a triple. We battled and voted. The former won.”

Few fans in Freedom Hall took notice that year, Gabriel says. Neither did the cheerleaders. That summer during a baseball road trip, he saw Hagy doing his shtick at Orioles games. He stole the idea. “At the first home game of the championship season (against South Alabama), I spelled C-A-R-D-S out with my body after the fight song as I played the character Unknown Musician.

“At first I did it right in front of the bandstand. Then there was that big aisle around the court. Then one game I just ran out onto the court and did it. There was only one security guy — one of those Andy Frain fellows — and he didn’t stop me. I high-fived him on the way back.

“My cue was the opposing coach. As soon as the Cards would make a run and the other coach raised his hands to call a timeout, I’d run down the ramp to the court. I’d beat the cheerleaders and get there before the band started the fight song.”

Was you identity ever revealed?

“Once I did it at an away game, again at Cincinnati. But I ran too far. Some guy ripped the bag off my head.”

That happened at least one other time, in a much more prominent manner. “You remember Joe Knight? He was on Channel 3 Sports. And NBC was the network that televised the NCAA in 1980. So WAVE had some special from Indianapolis on the Sunday before the title game on Monday. It was a pep rally kind of thing.

“And they wanted some band members. Only a few of us were there, staying with friends. The rest of the band was going to bus back up the next day. When the band director handed us the show format, it read something like ‘Unknown Musician unmasked.’ I had to play along.

“So when Knight ripped off the bag, I immediately turned away from the camera, then put on a big pair of clown sunglasses so people wouldn’t know who I was.”

If it sounds like the band then was a little more loosey-goosey than today’s, you’re right. These days, when every break in the action is seen as an earning opportunity, the pep band tends might not even play, while hired guns from some corporate sponsor distribute T-shirts or bags of peanuts to fans who just gotta have one more in their wardrobe, or free food.

The fight with the Duke basketball players:

“Once we got in a snowball fight with the Duke players.

“We played an afternoon game against them in Charlotte. It was after the championship year. It snowed 8 inches and we were stuck in the same motel as them. They’d get to eat first at the buffet. The hotel ran out of food. There was nothing but a platter of grits left for us. So we pelted them with snowballs.”

And then there were these:

Unknown Musician and the band and Rob Hickerson, and even Sedat Acton, the handstand guy, weren’t alone.

There was hubby and bride, Stuart and Phyllis Grossman in their matching stripped refs jerseys, letting the zebras on the court know the ones in the stands weren’t happy with just about every call that went against the Cards.

There was father and son, Buddy and Tommy Cohen unleashing on the visiting bench during timeouts, walking across the old wide Freedom Hall aisle around the court, from their front row seats right to vociferously berate the likes of Lefty Dreisell and Dana Kirk.

There was the entire Freedom Hall crowd, full with long time diehard fans, who would, to the befuddlement of other schools, always cheer, “Go Cards Beat Purdue.”

You can now subscribe for free, and get all my posts directly in your email box. Just fill out the form at the bottom of the page.