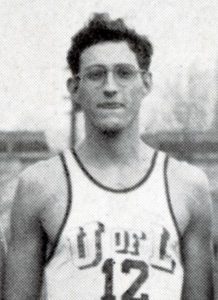 Every campus has a guy.

You know, a character somewhat peripheral to school life, but who’s always around, insinuating, often annoying.

The guy who becomes a running joke of sorts.

In this day and age, he’d become a meme. In my student days, he was an annual mention in the Louisville Cardinal’s April Fools issue.

I’m talking about Harry Bockman, that guy in the Registrar’s Office. Everybody at U of L had an issue with him sooner or later.

I’ll get to his dislike for iconic football coach Howard Schnellenberger in due time, but first, the rest of his story.

Bockman, Class of ’46, ran track for the Cards, was a WWII vet, Purple Heart winner, and entered the Athletics Hall of Fame in ’84.

According to one former student, Harry loved to crochet.

I’m not sure how long he toiled in the Administration building, but he was sure around during my adventures on the Belknap Campus in the 60s and 70s.

Most of his infamy arose from his job, checking student IDs at football and basketball games. It was reputed that Harry knew the face if not name of every student on campus. Which “photographic” memory did not alleviate the necessity of having one’s ID Card in hand for Bockman’s scrutinization for entry.

Harry was, shall we say, rigid. The stories are legion. Both about his obsessiveness, and about those who tried, and on occasion, overcame it.

Lowell Katz M.D. was the Cardinal Bird mascot during his undergrad stint in the mid 60s. Katz tells how he’d dress in his mascot garb at home before games. Bockman still required Katz to show his ID.

DM, who shall remain anonymous for reasons that might be obvious, tells of an end run around Bockman, for a game at Freedom Hall.

Seems his DU frat brothers and he wanted more than their usual case of brew to quaff at a hoops game. So they decided to haul a keg into the tilt, using a wagon to schlep it up the ramp inside Freedom Hall.

“There were 10 or 15 of us. As we approached Harry we surrounded him, except for the guy pulling the keg, who scooted around his back as we overwhelmed Harry. He never saw it.”

Such was Harry’s notoriety on campus, he became an annual got to be in there of the school paper’s April Fools issue.

The ’74 edition ran a story that APO, the service fraternity, had bestowed Bockman with their “Mr. Personality” award.

In a fake ’66 article about how students were going to get free NCAA tickets, no punches were pulled. He was referred to as “Mean Ol’ Harry.”

In a faux ’73 story about how the football players went on strike, Bockman was said to be the new QB.

In ’68, it was reported he had been elevated in a surprise move by the Board of Trustees, from his position in the Registrar’s Office to Chief Executive of the university.

My favorite is a real story in a December ’65 issue, titled, “Faulty System And Not Harry Bockman To Blame For Student Admission Problems to B-Ball Games.” Among several photos accompanying the article is one of Coach Peck Hickman (“No, I left my ID at home.”), and another of an elderly woman, walking through a turnstile (“But Harry . . . I’m your own mother.”)

What I know is, Harry Bockman was obsessively strident.

You could have been in his office that day over an issue that would only occur with a student, and Harry would still need to see your ID that night at the game.

What Harry Bockman also did during this employment was man the yard marker at home Cardinal football games.

Which brings me to Harry’s dislike for Howard Schnellenberger.

Years later, probably some time in the 90s, I ran into Harry at ear X-tacy. Though I really didn’t know him personally, I chatted him up.

Somehow, the conversation got around to the Schnell..

Because when Coach Pipe came in, he changed everything. Including who handled the yard and down markers.

“He started paying people, and we did it for free.

“We even bought our own uniforms.”

He had no kind words for the iconic pigskin mentor.

I took my leave. Otherwise Harry would have gone on about the Schnell until closing time.

ADDENDUM: This note from a former student, after posting the article. The other side of Harry:

This is in regard to your column on Harry Bockman,  As did just about everyone else on campus, especially sports fans, I, too, knew Harry as something of a pain in the butt, but it’s just possible that Harry saved my life.

My dates here may not be exact, but most likely over the summer of ’64, when Vietnam was just heating up, I transferred from Speed to A&S, a seemingly straightforward process.  But not for me.  Mid-summer, home in NYC, I received notification that since I had dropped out of college, my draft status was duly changed from II-S to I-A (deferred student to draft eligible).  My shiny new draft card was enclosed.

I was terrified.  I called U of L several times to no avail (remember what long distance calling rates were like then?), and was contemplating flying back to Louisville to straighten this out before I could be called up, when I remembered a name of someone I knew in the Registrar’s office.  Harry, who else?

When Harry finally came to the phone, I begged his assistance, told him my sad, scary story and he promised to look into it and get back to me.  The following morning, he called back at my parents’ home to tell me he had found what had gone wrong and had corrected it.  He had called my draft board, explained the error and was sending letters to them and to me on university letterhead to assure them that I was still a student, had never ceased being a student, and they must not draft me.

He further suggested that after a day or two, when I got my copy, I should drop in on the nice people at Selective Service and pick up my new II-S. How close did I come to being drafted?  Though I quickly received my new draft card, and probably was in I-A no more than 2 weeks, a few days after I got my new draft card, I received another letter from the draft board; I was being summoned for a draft physical.

I called them immediately and spoke with the woman I had met when I went in there.  She explained that though I was clearly draft-deferred because of my full time student status, in the time that I was listed as eligible my name came up for a physical and I had to go take it or else.  It was an experience straight out of Arlo Guthrie, but I survived and finished my degree undrafted.

Would I have been drafted without Harry’s help?  It probably would have been sorted out, but I was thrilled I never had to find out.  When I got back to campus in the Fall, I made a point of going to see Harry to thank him.  He barely acknowledged me, but I thanked him profusely.  Though I always made a point of greeting him at games, he never again made any sign he knew me.

You can now subscribe and receive all my posts for FREE in your email inbox. Just fill out the simple form below.