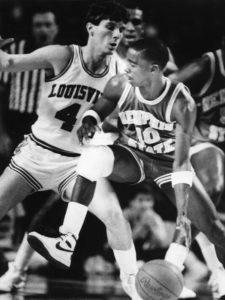 So, I’m standing in line at the concession stand at Mid South.

The Cards are about to take on their biggest rival Memphis State for the ’88 Metro Conference tourney crown.*

*Yeah, I know, Cats vs. Cards, Feather vs. Fur, yada yada, yada. In my lifetime, Memphis State, whom U of L has played 125 times, has been far and away the hugest rivalry. Period.

There’s a kid about ten or eleven next to me in line dressed in all Tiger, and we’re going back and forth, having fun with it. At some point, his mother walks up, notes the conversation, immediately grabs her son by the arm, pulls him away, and as they’re walking off, yells at him, “How many times have I told you, NEVER talk to a Louisville fan.”

It was not my only set-to of the day.

At some point during the battle, I tired of the Tiger fan in front of me standing up. So I grabbed him by the back of the shirt and pulled him down.

Fortunately my pal is a therapist, and he was able to ameliorate what could have been an ugly situation.

Meanwhile on the hardwood, the Cards were up at the half, but Memphis State made a big run to start the 2d, and, if memory serves, eked ahead a bit. During which scoring streak, the gym was louder than any I’ve ever been in. Literally.

Mid South held sound. It was so loud and disorienting, I recall wondering how it didn’t affect the players’ motor coordination.

Two reasons why I love Larry Finch, even though he starred for Memphis State, was an assistant there, and headcoached the Tigers until ’97 from ’86, after Dana Kirk was fired for recruiting violations, had all his NCAA Ws taken away, and indicted for tax evasion.

At some point, during Finch’s tenure leading the program, some buddies and I took a summer blues excursion through the Delta. Clarksdale. Robert Johnson’s gravesite(s), Robinsonville, Stovall, Clack’s Grocery, the whole schmear.

We stopped at the Rendezvous on the way down. Sitting at the next table were Finch and his assistants.

Of course, we chatted them up. Nice guys. Finch talked about how much he respected U of L, and cherished the rivalry. They even shared some of their leftover ribs, to sate us somewhat, as we waited for our orders.

Then there was the night of February 3, ’96, when the rivals battled in a scheduled meeting for the first time since ’91. U of L won by 18, in a game that featured an actual made hook shot by Beau Zach Smith.

In his post game presser, Finch was gracious in defeat, reiterated his respect for Louisville basketball, and mentioned as how the schools should be playing every year.

Memphis State’s coach from ’74-’79 was a fellow named Wayne Yates.

Though he won almost 2 of every 3, the powers that be thought they could do better, when they fired him and hired Dana Kirk.

Anyway, once when Yates was first chair on the bench, visiting Freedom Hall, he and his assistants were dressed like funeral directors. Truly.

So, our gang which sat right behind the visitors’ bench easily arrived at our designated heckle of the evening.

Nothing more, nothing less. Repeatedly as the Cards beat down the Tigers.

I loved the looks of several on the Memphis State bench, as they’d turn around and wonder, what we were screaming about?

The guy was a real person, but the Bag Man is all mythos, a figment of my gang’s collective sordid, addled mind.

During the 80s, when the rivalry was most fierce, there was always this fellow who was part of the Tiger entourage.

A little disheveled, frumpy suit, shirt collar slipping over the edge of his coat, he looked like he’d have a cigar butt in his mouth, were he anywhere else.

And he always — always — carried an overstuffed leather briefcase. Which he never set down.

What’s he got in there, we wondered year after year?

Turns out his name is Lou Strasberg. And he was the team’s traveling secretary, or something like that.

Which doesn’t come close to the stories we made up about he who became known to us as The Bag Man.

Back in those days, it was Memphis State, which had the hottest dance squad in the land.

Their cheer squad too.

Before it was outlawed for safety reasons, they did this thing where a 3-2-1 layered pyramid would move from one end of the court to the other, doing a cheer.

It was damn impressive, I gotta admit.

Wonder what they did on their retreats?

As for what happened on the court:*

* Other than somebody throwing a knife from the stands, Darius Washington’s meltdown at the line, and Fred Horton getting escorted out of the gym in cuffs, that is.

*Anybody besides me remember Win Wilfong?

But during the most heated interlude in the 80s, despite U of L’s dominance of the decade nationally, the rivals were evenly matched, and the battles were fierce.

U of L went only 12-7 against Kirk-coached teams. Even though it always seemed like the former Card assistant forgot to remember to save some timeouts for crunch time, as he should have learned from mentor Denny Crum.

In fact, Memphis State won its fourth in a row in the teams’ initial meeting in ’85-’86.

Need I detail how that season ended for the teams?

No, but it’s oh so so very very much fun.

In the regular season finale, Andre Turner fouled Milt Wagner, and . . . oh you know. It was the loudest moment in Freedom Hall ever, until that last game played there, the win over #1 Syracuse.

That setback broke the will of the Tigers, who were surging, and intent on returning to the Final Four.

U of L handled Memphis State easily a week later in the league tourney final. Then the Tigers lost in the opening weekend of the Dance. Kirk was fired after the season, and went to the hoosegow.