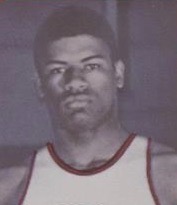 That young Westley Unseld would eventually become heralded Wes Unseld wasn’t so obvious at the beginning of his basketball career.

The tale is told of a conversation between Wes’s brother George, a baller of no small measure who played at Kansas, and Sol Mocerf, the father of Howard, another member of the ’60-’61 Seneca Redskin Freshman team.

While waiting to take their family members home after a practice one day, George is said to have offered, that he didn’t think “Wes was going to amount to much.”

Wes Unseld has acknowledged how his career was kickstarted under the guidance of Carl Wright, the former Eastern Kentucky Maroon, who coached Wes in those formative years.

As Howard Mocerf remembers, Wright worked with the young prodigy daily during practice at a side basket in Seneca’s gym. Shooting. Rebounding. Footwork.

“He’d wrap a football chinstrap around Wes’s hands, so he’d learn to hold the ball with his fingers, not in the palm.

“Wright worked his butt off.”

Waggener was Seneca’s chief east end rival during those formative seasons before the Redskins’ ’63 and ’64 state titles. The Wildcats were led by Keith Thomas, who later played at Vandy, Paul Long, who fashioned a successful college career at Wake Forest and Virginia Tech then played four pro seasons, and 6-1 1/2 pivot Mike Skelton, who later played for Yale.

As Skelton recalls, somewhat jokingly, he “had his way” with Unseld during their first meeting in December ’61, Skelton’s senior campaign, Unseld’s sophomore.

“He could barely get out of his own way. I’m sure I outscored him. I was full of Waggener party boy fire.”

The schools met a couple months later at Masonic Home, then the Wildcats’ home court.

To paraphrase Skelton, “In the rematch, he dominated me.”

In 60 days, Unseld turned the corner and was on his way to stardom, two time All-America, NBA MVP and Rookie of the Year (Same season), NBA champion. Naismith Hall of Fame.

And, one guy’s opinion, the most significant recruit in the history of U of L hoops.

My fondest memory of Unseld, and what kind of great guy and good person he was, is of a moment that came on campus not on the court.

The morning after the Cards had battled Bradley in Peoria, then traveled back to Louisville after the game, I saw Wes walking to his 8:00 o’clock class.

Unseld was a Dean’s List student, and a thinking man.

Mocerf, who remained friends with Unseld through the decades, tells how Wes turned him onto Malcolm X and other writers and thinkers, and “opened my eyes to what it’s like growing up black.”*

*If only Wes were here today, to try and share that message with us all.

Rare are the athletes, no matter how much acclaim comes their way, who are remembered universally and unanimously for a singular trait.

Tell me, you hoopaholics, have you ever seen someone sweep the boards, turn in mid air, and throw a two-handed half or three quarter court outlet pass to a streaking teammate, when the announcers haven’t invoked the name Wes Unseld?

One true answer: No. He’s. Mentioned. Every. Time.

As for other on the court moments that come to mind, there are a couple, which I’ve mentioned periodically through the years.

The time when he was whistled for three fouls in the first half against rival Cincinnati, then came out in the 2d and outrebounded the entire Bearcat squad, which included a pair of stalwart bigs, Jim Ard and Rick Roberson.

Then there’s one of the most exciting high school games I’ve witnessed. Seneca vs. Taylor County. Three of Kentucky’s greatest HS players ever on the court at the same time. Unseld, his teammate Mike Redd and Clem Haskins.

What a show. Redd and Haskins were a wash. Deetz — Wes’s nickname — was the difference.

I’ve never been much into throwback jerseys.

I have but one.

You can now subscribe for free and receive all my posts directly into your email inbox. Just fill out the simple form below.

7 thoughts on “Remembering My Favorite Cardinal Ever”