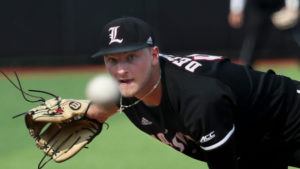 Under the Old Normal, may it rest in peace, the first pitch of the College World Series in Omaha would be Saturday.

In a Reasonable Normal, the Louisville Cardinal Nine would be there, co-favorites, with, say, the SEC anschluss of Florida and Ole Miss, who started the abruptly cancelled season with a sizzle, and, oh, Vandy, which has driven the Cards to the Douglas County line a couple of times.

In a Perfect Normal, this would be the year.

In ’07, Dan McDonnell led U of L to the CWS in his first season coaching at The Jim.

Took a couple out of the loser’s bracket last season.

The Cards and McDonnell were poised. On the cusp. It was time.*

*As soon as we saw what Denny Crum did on the sideline during his debut campaign in Freedom Hall, Louisville fans “knew” a title would come eventually. Same with his successor. So too, it is obvious with McDonnell, who has turned U of L’s long time nonentity of a baseball program into a national power.

A a couple of Card hurlers — Reid Detmers and Bobby Miller — were snatched by LA franchises in the first round of the MLB draft, and another every day player, Zach Britton, was taken later on.*

*I read about the selections the next day. I don’t watch draft coverage, even in these fallow times.

I watched a video of Detmers’ Uncle Charlies, which curves arced in EDT and nestled in the catcher’s mitt a time zone over. I thought of the term Dwight Gooden used to describe his curve during those phenom years of his, before the meltdown. A play on the old shibboleth, he termed, “Lord Charles.”

I noted that Miller, the #2 guy, is really good, but that the real alpha dog on the staff was probably Luke Smith, who takes the mound like he’s playing outside linebacker for the ’85 Bears.

U of L, I saw, was the only school with two players taken in Round One, both pitchers. Which had to mean excellence on the mound, right?

I observed that U of L’s preseason ranking was either 1st or 2d in all the polls. And how they righted the ship after an explicably rocky 1-3 start,* and, after winning 12 of the next 13, were still ranked no lower than 6th, and as high as 2d.

*Two of those early Ls came in Oxford Town, to a Johnny Reb squad that blasted out of the gate, 16-1. The third was in the home opener, in mid February, on a midweek day when the Fahrenheit descended into the upper 20s at sundown. Which is to say, not exactly balmy baseball weather.

So, initially, my point with this little tome was to go all stentorian.

Explain to my awestruck readers with infinite expertise and in minute detail why this year’s Cards would be the nine to get over the hump.

To dazzle you with stats and insight*

*Even though I hadn’t watched U of L play any of its 17 games, and was paying only the usual casual attention I do until it’s warm enough to head to The Jim in shirt sleeves.

Buuuuuuuut, I had to call my SABR buddy to inquire if WHIP was now considered a more incisive pitching stat than ERA? And look up at the Google to see the order of on base percentage and slugging average after the batting average in the slash line.

Plus, I had no idea if “Competitive Balance Round A” was part of that first round of the draft, or some CBA outlier.

So, some sense of maturity and perspective settled in.*

* I also remembered the time I learned a lesson about trying to pass myself off as more of an expert than the reality. In the mid to late 90s, when in my 40s, I was still doing music reviews at LEO. And realized, I didn’t like any of the new stuff. And was old enough to chaperone some of the live gigs I was covering. And tried to make myself sound like I knew about the new music, even though I was decades removed from the target demographic. And got called out by readers several times. So I gave up the gig.

What I’ll say is it’s just a feeling, wishful thinking perhaps, that this would have been the year for U of L baseball.

*Forgive me, couldn’t help myself.

The rest of the team was starting to round into Omahaesque championship shape.

Surely the Cardinals would be taking to the diamond Saturday or Sunday in whatever they call that stadium that replaced Rosenblatt.

And that it’s not happening is but one more reason why these times are so so very strange, perilous, and too often almost hard to take.