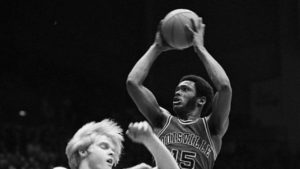 If my abacus is working properly, we’re talking about the fall of ’68.

Which would have been my second year of law school on the Belknap Campus.

One evening after dinner, I was shooting hoops with a classmate, on an outdoor court near the dorms. Milller Hall, maybe.

Walking toward us came heralded frosh, recruited from Male High, Henry Bacon, and another fellow, whom I assumed was a member of the Cards noteworthy freshman class, Jim Price.*

*The others in the class were Mike Lawhon, Larry Carter and Al Vilchek. Ron Thomas later transferred in, if memory serves, and became a key figure on the ’72 Final Four squad in Denny Crum’s first year.

It was indeed Price from Indy, about whom I knew little.

They asked if they could shoot along? Duh. We didn’t play hard to get.

Then one of the Cards said, let’s play two on two.

I’d like to say, I responded with something clever like “You think you can handle us?” But I have no such recollection. Nor do I remember which of the duo I teamed up? Nor the name of my classmate, which also is floating about in the synapses somewhere.

Anyhow they were really nice fellows. And, not just going one on one, graciously included me and my similarly undersized, slow classmate, without shooting range with no hops in the action.

This was when I was still but a fan, and not covering the Cards in any official capacity. I don’t recall any further contact with Price — or Bacon for that matter — other than perhaps a nod hello on campus.

Jim Price went on to become a Cardinal great, easily one of the Top 10 guards in U of L hoops history.

There’s another reason I love Jim Price, other than what I’ll eventually get to, something he did better than any Card guard ever.

Years after his career at U of L ended, after his 11 year stint in the NBA was over*, Price was back at U of L for one of those periodic hoops reunions. In the 80s maybe, or the 90s?

So, at that reunion, I walk up to Price and I’m starting to reintroduce myself, and he gets this quizzical look on his face.

He points a gentle, knowing finger toward me.

“I remember you. Didn’t we shoot some once?”

There are some Cardinals who are remembered — partially in some cases — for a specific trait.

Bud Olsen’s passing from the pivot.

And, the point of this little exercise here, Jim Price posting up.

He must have cherished when Denny Crum arrived. The John Wooden disciple loved to pull his center up in the lane and go high/ low. The game was totally different then, played significantly closer to the basket than now.

There’d be a reversal of the ball, and the muscular 6-3 Price would go down low, spread his legs and, shove his butt back into his defender, facing away from the hoop, plant himself. Strong.

His turn around jumper was a thing of beauty.

Given the evolution of the game, it’s a lost art.

They lost their opener by a penny at Florida, then reeled off fifteen straight before losing at home to Memphis State. Won seven in a row before falling again to the Tigers.

The get back, of course, was that sumptuous playoff W at Vandy’s Memorial Gymnasium, an 83-72 walkaway to the NCAA tourney in front of a seriously raucous and evenly divided assemblage.

The team steadily moved up the polls, ending the season at #4, and making it to the Final Four, where they fell by 19 to Bill Walton and UCLA.

Guards, as big as they’ve gotten through the decades, just don’t post up much anymore.

Jim Price sure could. And did.