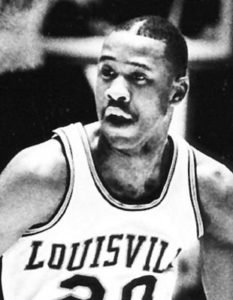 Yes, duh, this is a consideration of the iconic U of L game when Milt Wagner netted two free throws with a tick left on the clock to steal the ’86 regular season finale from arch rival Memphis State.

Any lifelong Cardinal fan born before the mid 1970s remembers the particular moment and most of the details of the joyous concluding seconds.

But, until I watched a replay of the game yesterday for the first time, if someone were to have asked me what I remembered about the rest of the action, my answer would have been the same as Edwin Starr’s, when he was asked, “War, what is it good for?”

So, when I happened upon a full video yesterday, I settled in to watch.

First the details of the final sequence.

Down 68-69 with way less than a minute to play, U of L had the ball. Wagner missed a jumper. Pervis Ellison grabbed the board, but his follow shot was blocked by William Bedford, and the Tigers had possession.

Dana Kirk called timeout with :14 to play. It was before his team advanced past the midcourt stripe. Then he called another, his last timeout, before the ball needed to be inbounded.

Jeff Hall almost stole the sphere on the inbounds, but it rolled out of bounds off his hand. After the Cards couldn’t pilfer the ensuing throw in from the endline, Herb Crook fouled Andre Turner. The foul was called by Don Rutlege, one of the best refs of the era.*

*The other zebras were Paul Housman and Paul Galvin.

Turner was an 86% FT shooter, and had canned 48 of his previous 50, before stepping to the line at :08. If he makes both FTs, the Cards were goners; the 3 point line didn’t come along in college hoops until the next season.

Denny Crum called a timeout, just as Turner was ready to receive the ball at the line.

*At this time, am I snarky enough just to toss out the name Darius Washington, just for giggles? Apparently so.

Following Crum’s direction during the previous timeout to “drive it down the floor,”* Wagner never considered passing the rock. He was double teamed in the corner. He pumped faked before rising for the shot, and, well, every Cardinal fan worth his salt knows what happened the rest of the way.

*During that timeout, Crum, when drawing up what was to be the winning play, advised, “I don’t think they’ll foul you.” Well, he was wrong about that.

My memory has been that Milt immediately raised both arms in triumph right after being fouled. But it was Billy Thompson and Jeff Hall who did. Though Milt was high fiving everybody close by.

He did raise his arms after draining the first.

The then record crowd of 19,582 at Freedom Hall had been really loud the entire game, until matters turned dire. Memphis State had the ball and lead with :17 to play.

When Wagner was fouled, it then became the loudest cheer ever at FH during a U of L game. Until that 2d half against Syracuse in the Freedom Hall finale.

It was the sound of ecstasy, cranked beyond 11.

Wagner was also an 86% FT marksman that season.

I can only speak for myself here. There was never even a scintilla of doubt that he would make them both to win the game.

Memphis State had beaten the Cards four times in a row before that game, and were ranked #7, and considered legit title contender.

Until that loss broke their will.

Memphis State playing a lot of zone, led most of the way.

Baskerville Holmes not only had the greatest name in the history of college hoops, he could really ball.

I always remembered Vincent Askew as a guard, but he played forward. Dwight Boyd was the fellow who started alongside Turner.

In those days, a player could be called for a charge, but a basket would still count. As happened when Tony Kimbro was assessed a foul, but a made bucket pushed the Cardinals ahed, 64-62.

I’ve talked about this before, but I still watch in wonder how close the game was played to the hoop in those days. Wagner and Hall would repeatedly pass up open 18-20′ shots, to work it in closer.

Memphis State’s zone often didn’t push out any higher than the charity stripe.

The game was really well played, though U of L turned it over a bit early.

No timeouts were called by either team until there was 4:50 left.

Lots of John Tong on the telecast.

The game was played on Denny Crum’s 49th birthday.

Jerry West was in the Hall.

My memories of Conley as an announcer have always been that he was pretty astute. But, during this telecast, he wasn’t very at all, often stating the obvious.

Except, at halftime, when Pervis only had 5 points, he offered that U of L needed to and would get the ball more to Ellison in the 2d. Which they did. The Cards’ center finished with 18 and 8.

And, he said the Cards would go to Wagner at the end.