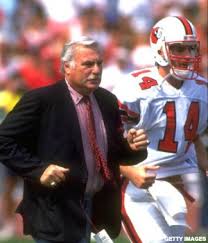 Looking on the interweb for something else, to be totally transparent, I came across videos of these two Louisville at Ohio State games, a highlight piece for ’91, and the full game for ’92. I immediately set aside my other quest, and scrambled down those rabbit holes of Cardinal history, and thus report.

There was certainly a deja vu all over again feel to that pair of gridiron battles along the banks of the Olentangy in the early 90s.

The least of which may have been that Cardinal coach Howard Schnellenberger wore the same black sportcoat on the sideline both seasons, which is worth a mention for he did so despite the blazing, relentless sun and truly abysmal heat.

An old school guy, ever the in-game delegator, the Schnell never wore a headset, never carried a laminated play sheet, and rarely appeared to inquire in advance of his offensive or defensive coordinator what play was to be called, or the defensive alignment?

But, no matter how cold, or how hot,* he always roamed the sideline with a look of concern, in a sportcoat and tie.

*Both of those games in ’91 and ’92 were in early September and the Fahrenheit was significant. I forget which one, but one of them was the hottest football game I’d ever attended, until that Pizza Bowl stadium opener against UK. The Professor and I actually took leave from our seats for a few moments, seeking shade and hydration under the stands.

There are of course more significant similarities between the games than Coach Pipe’s attire.

Like how, with less than a minute to play, the underdog Cards had opportunities in the Ohio State Red Zone both years to steal away from Columbus with victories.

And how they were thwarted by the homestanding, extremely talented Buckeyes once, and again 365 later.

In ’91, the Cardinal signal caller was Eric Watts. Jeff Brohm had broken his leg late in the action the week before when the Tennessee Volunteers invaded Fairgrounds Stadium.*

*Oh my was there a lot of orange in the stands that night.

So well did Watts play in U of L’s 15-23 loss (22/43, 303 yards, 2 TDs), the Professor declared on the ride home he would have a long and illustrious professional career in the NFL. Of course, as most Cardinal fans are aware, Watts, son of a professional wrestler, followed in his father’s footsteps.

The NFL made no efforts to pry him away.

But he was a stud on the then natural grass in Columbus in ’91.

Early on Watts found TE Jose Gonzalez for a 48 yard TD strike. This was after Ray Buchanan tallied from 90 yards away with a blocked conversion for a deuce.

Late in the game, he led the Cardinals to the Buckeye 12 yard line, where an errant pass to the right corner of the endzone on 4th down ended U of L’s game effort to try to tie the tussle with a two point conversion.

Ralph Dawkins led the Cards in rushing. 66 net yards on 18 totes. Plus he led Louisville with 5 catches for 78 yards.

The following season, Brohm was back and, along with Ralph Dawkins, excelled in the 19-20 defeat.

Brohm was 22/30 for 230 yards and a passing score, to his brother Greg right before the half.

Dawkins left an impression even greater than the year before. 19 carries for 125 yards. Twice he found paydirt. Again he led the Cardinal receivers with six catches.

In that rematch, U of L, down 7 with a half minute left on the clock, scored on 2d & Goal from the six yard line: Dawkins on a simple but effective trap up the middle.

The Schnell did make this decision, and went for the W. Brohm, scrambling for his life while rolling left, overthrew Dawkins, in an attempt to win it right then.

That wasn’t the end of the excitement.

Ray Buchanan snagged the ensuing onside kick in full stride, and scampered about 25 yards deep into Ohio State territory, for what might have been a half minute effort to grab the victory.

Among the other noteworthy Cardinals on the team at the time of these games. Tom Cavallo. Joe Johnson. Anthony Shelman. Aaron Bailey. Anthony Bridges. Jamie Asher. Klaus Wilmsmeyer. Carlos Bean.

The Buckeyes, then coached by John Cooper, were loaded with talent. And that’s not even to include the QB in the ’92 affair, Kirk Herbstreit. Who was to go on later in life, and become Kirk Herbstreit.

*And incorrect actually, which he endured throughout his Ohio State career, because the school misspelled it. The correct spelling is B’ynote’.

The Jeff Brohm-less Cards finishing 2-9 in ’91, and 5-6 in ’92, marked two of Howard Schnellenberger’s five losing seasons at U of L, before he jumped the tracks ahead of the collision he promised, to become Supreme Commander Sooner Nation. At least for one season anyway.

To be honest, until I watched those videos, I’d forgotten details of the game.

Peripherally I was reminded that, before one of those battles, I consumed the best bratwurst I’ve ever eaten, purchased from some vendor outside the Horsehoe.

I was also reminded of several earlier visits, during my law school years, to watch Ohio State play at home. My brother was doing his Plastic Surgery Residency at Ohio State, and had season tickets.

Among those affairs was the somewhat famous coming out party of a game when the Buckeyes upended then #1 Purdue, 13-0. OSU’s QB was Rex Kern. But the stud was Jack Tatum, who made his mark that day by shutting down All-America wideout Leroy Keyes.

When I advise you could both hear and feel the force of Tatum’s hits forty rows up, it is only slight hyperbole.

And, I’ll get out of here with this: Like, love or loathe The Ohio State University, Script O H I O at halftime is pretty damned cool.

But not as cool as if the Cardinals had prevailed in one or both of those games.