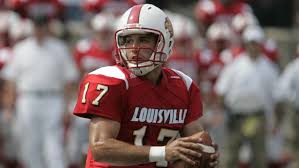 So overwhelming was the response to my consideration of U of L’s football forays to THE Ohio State University– We apologize for the interminable delays at Customer Service, please stay on the line, a representative will get to you eventually — that I felt compelled to give it another go.

So, while shuffling about the interweb, I came across an enticing title on the youtube, “Best 4th Quarters,” with a link to the final 25% of the Cardinals vs. Broncos back and forth in the highly anticipated 2004 Liberty Bowl.

And, remembering little about that year’s U of L pigskinners, or that bowl battle in particular, except that the Cards had prevailed, I figured, “Hey, cut to the good part. Why waste 2:59:28 watching the whole game video, when 46:49 gets you right to the filet mignon?”

Some thoughts after watching.

When I noticed immediately that the brouhaha stood at Louisville 35, Boise State 34 at the beginning of the 4th, I paused and wondered if I really shouldn’t oughta take in the whole affair? But didn’t . . . yet.

Yet, thanks to the obsessives at sports-reference.com, I did find the box score, and thus am able to provide a quick recap of the first 75%, without actually watching. Which I really should oughta do . . . maybe.

The Cards seized the advantage a minute and a half later, on a six yard Stefan LeFors to Gary Barnidge toss. Art Carmody drilled the conversion. 7-3.

*Hmmm, wonder if there’s a series, “Best 1st Quarters?” Might have to actually watch. Will advise.

Boise sort of dominated the 2d, but only after Brian Brohm hit Broderick Clark from 30 yards out. 21-10.

Then came a Bronco blitzkrieg.

They scored on a fumble in the endzone. Then on a 19 yard pass. Again on QB sneak by Jared Zabransky.

*Really good thing I didn’t watch the whole game . . . yet. Kind of boring affair between the schools with the #1 and #2 offenses in the country.

The affair got a bit less exciting in the 3d, during which a Broncos’ FG increased their margin to 21-34.

The Cards bounced back though. LeFors found JR Russell in the endzone. 28-34. Then the Cardinal QB* ran it in for that 35-34 advantage, heading into the 4th.

*Stefan LeFors was a great college signal caller. Perhaps not quite as good as stated by The Professor, who declared him “the best college QB ever,” but, you know, really good.

The lead changed hands twice in the 4th. Boise State scored first on a long drive, to go ahead 35-40, missing an attempted two point conversion.

Louisville grabbed it back, for good, on an Eric Shelton plunge, but also missed a two pointer. 41-40.

Boise State was driving, but had no timeouts for their final offensive to win the game. Which ended when Zabransky had to fling the ball after a hurried snap into the endzone, where Kerry Rhodes picked it off.

That Cardinal team had a stud running back corps. Besides Shelton (18 carries/ 76 yards), there was that Michael Bush fella (12 for 96) , and Kolby Smith.

Other Cardinals of note on that squad* included Elvis Dumervil, Amobi Okoye, Brandon Johnson, Joshua Tinch, Montavious Stanley, and Montrell Jones. Though I should name them all, the offensive linemen included Kurt Quarterman and Jason Spitz.

*Truth be told, I can rarely remember which Cardinal footballers played in which years.

It was Bobby Petrino’s second season as head coach.

It was during the time that the pigskin punditocracy was starting to declare him, not without some legitimacy, “The Next Great College Football Coach.”

He was already flirting away. During the telecast Mike Tirico and Kirk Herbstreit talked about Petrino’s dalliance with LSU, where Nick Saban had just jumped ship. Even though Petrino had just signed an extension ten days earlier.

On the field post-game, sideline reporter Jill Arrington had a chance to corner Petrino on the rumors. Instead she tossed the dour coach a softball, something like, “Did the LSU rumors affect your game preparation?”

Petrino 1.0 stuck around for a couple more seasons, while breaking his engagement with Auburn, then taking his talents, for part of a season anyway, to the Atlanta Falcons, then moving on the Razorback Country, like the next day. Where it ended in a motor psycho nightmare and a neck brace.

Coming into the game, Boise State, coached then by Dan Hawkins, had the nation’s longest winning streak.