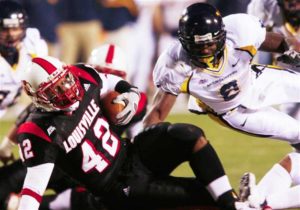 It was a dark and chilly night.

And, Fiesta Bowl W notwithstanding, it was the biggest football game in U of L Cardinal history.*

Sideline reporter Erin Andrews was shivering on the field. Meanwhile ESPN’s A Team of Chris Fowler and Kirk Herbstreit benefited from several space heaters in the TV booth, though they had the window open.

*The game that supplanted this one between #5 Cards against the #3 Mountaineers as Most Important Ever came but a week to the day later in Piscataway, New Jersey. The story of which, I doubt you shall read about here.

Perhaps it was the gravity of the frigid Fahrenheit in the 20s, November Thursday Prime Time encounter — Winner legitimately in National Title Game discussion, Loser SOL — or maybe just steadfast defense by both home and away, but there weren’t a lot of first half offensive fireworks. At least not as many as expected.

Brian Brohm started 3/3 to three different receivers. Freshman Anthony Allen proved in that opening foray he wanted his imprimatur on the battle as much as teammate Kolby Smith or Pat White or Steve Slaton, heralded toters for West Virginia.*

*Reminder: This is the season Michael Bush broke his leg in the opener against UK.

But a sack and failure to convert on 3d & 17, meant Louisville settled for an Art Carmody field goal. 3-0 Cards.

The Mountaineers fumbled away their first opportunity. Followed by a Cardinal three and out.

Slaton, whom Herbstreit acknowledged as a contender for the Heisman along with Sooner Adrian Peterson, showed why the next time Rich Rodriguez’s team had the ball. 42 yards essentially untouched up the gut. WVa 7, Louisville 3.

Kolby Smith might have made it to paydirt on the U of L’s ensuing possession, after catching a Brohm toss in the open field. But, with lots of open green between him and the goal line, he slipped and fell.

But the Cardinals’ Red Zone difficulties continued. They gained but 7 yards on a 3d & 13 at the Mountaineers’ 15. Another Carmody three pulled Louisville within one. 6-7.

After a defensive stop, it appeared to be deja vu all over again. On the first play of U of L’s fourth possession, Harry Douglas, with an open lane to the the endzone, fell after a 40 yard advance. It proved inconsequential however. After a nifty Brohm completion to Mario Urrutia, Allen ran it in on a counter play. The PAT made it 13-7.

Which, with the offenses finding some mo’, lasted but 2:22. West Virginia’s signal caller White took it in. 13-14.

Then came the Cards most disturbing possession of the game, considering both announcers kept referencing Bobby Petrino’s “offensive genius.”

Louisville attempted smash mouth. But failed to get it across the goal line from three yards out, with five chances to do it. Four plunges up the middle, and a broken play, and the Cards were foiled. Carmody pushed the Cards ahead, 16-14 at intermission.*

*Three FGs weren’t going to close this deal, as they did on the Schnell’s Fiesta Bowl team, when a victory in Morgantown read, Klaus Wilmsmeyer 9, West Virginia 7.

After halftime, it was Louisville’s D and Special Team that pushed them clear.

Malik Jackson grabbed a loose ball, caused by Brandon Cox’s tackle, and took it in from 13 yards out. 23-14.

The defense pushed West Virginia back on the visitor’s next possession. The conference rival couldn’t convert a 3d & 24 from its own six yard line. Trent Guy returned the punt 40 yards for a TD. 30-14.

The game then opened up. West Virginia answered on its next drive. 30-21. But the Cards countered on theirs, Brohm to Urrutia. 37-21. Slaton, returning to action after sitting out a spell with an arm injury, scored. 37-27, after a failed attempt for two.

Cardinals pushed the tug o’ war out of reach at 44-27 when Allen scored again.

White’s TD tally with 2:18 on the clock was of no matter.

The 44-34 victory pushed U of L as close to that one-time promised national title collision as it ever had been.

The following week brought the ill fated trip to Rutgers.* Weeks later that “offensive genius” was gone, and the Cardinal football future was put in the hands of Steve K . . . K . . . Kra . . . oh I can’t even type out his name.

*Promoting the Breeders Cup, in town that weekend, The World Wide Leader had handicapper Hank Goldberg in the booth for a promo, when the Cards were up 16-13. “Does Rutgers become spoiler?,” he questioned presciently.

Bad thumb and all, Brian Brohm went 19/26 for 354 yards. But was inexplicably given no chance to try and toss it to TD Land on that last drive of the opening half.

Douglas and Urrutia each grabbed six.

U of L rushed for only 114 yards, compared to White/ Slaton led West Virginia, which rambled along the Field Turf for 318.

Malik Jackson scored on that fumble recovery, as Trent Guy did on that punt return.

It’s certainly one of my favorite U of L football games ever. Top Five.

What I recall is that it was the first home game, when they had one of those cameras on cables over the field. My seat in the Press Box was right behind the young techies who worked the controls for that.

What surprised me about watching the video for the first time was how much less used that innovation was used than it is now.