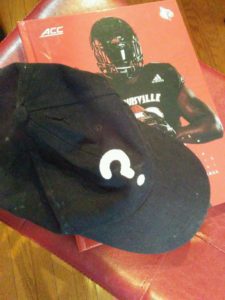 During normal times, an existence which we could not be further from, a preseason summertime conversation with your fan buddies might go something like this.

Sportsbee: “I heard Puma Pass has been awesome in workouts. Like the guy we always expected him to be, better than Micale. Quarterback controversy?”

X-Man: “That’s a joke, right? Tell me your kidding. Cunningham had the second best stats in the country last year. He’s on some player of the year watch lists. Are you and idiot?”

And so the colloquy would go . . . until the back and forth turned to the linebacking corps.

During these times, all such conversations always — always — begin with, “Do you think there’s going to be college football at all?”

Such it the reality of this daze we are enduring.

Which is why I’ve fallen into historical What Ifs?.

What if Johnny U. hadn’t become so good in the pros?

What if U of L had hired Bobby Bowden, who applied for the job, instead of Lee Corso?

What if Corso hadn’t been able to talk Tom Jackson into matriculating?

What if Howard Stevens shoulder pads would have fit tighter?

What if the Cards had beaten Florida State in the ’70 opener?

What if Lee Corso had stayed?

What if the Fair Board had turned Fairgrounds Stadium into a real football facility?

What if T.W. Alley could actually coach?

What if Vince Gibson’s Red Rage success could have continued after his first two seasons?

What if Bob Weber could have had at least one winning campaign?

What if Bill Olsen hadn’t been able to hire the Schnell?

What if the Schnell hadn’t been able to bull rush the community into a new stadium?

What if the Cards hadn’t tied San Jose State and won in Hattiesburg in ’90?

What if the Schnell hadn’t been able to talk the blazers into giving U of L a shot in the Fiesta Bowl?

What if the Cards had lost to Alabama?

What if Carwell Gardner played his whole career at U of L?

What if Jeff Brohm didn’t get hurt against Tennessee in ’91?

What if Jeff Brohm led the Cardinals into the endzone at Ohio State in ’92?

What if Anthony Allen didn’t transfer to Georgia Tech?

What if Ron Cooper had a clue?

What if John L. Smith hadn’t jumped ship and headed to Sparty?

What if Michael Bush didn’t break his leg against UK?

What if Bobby Petrino I had stuck around after the Orange Bowl?

What if in ’07, Tom Jurich had hired Mark Dantonio?

What if in ’07, Tom Jurich had hired Mario Cristobal?

What if in ’07, Tom Jurich had hired Dennis Erickson?

What if U of L had beaten Central Florida in ’13?

What if Clint Hurtt had been able to stick around?

What if Bilal Powell had reached his potential earlier?

What if Charlie Strong didn’t jump ship to Texas?

What if in ’14, Tom Jurich hired Dino Babers?

What if in ’14, Tom Jurich hired Dave Clawson?

What if in ’14, Tom Jurich hired Jeff Brohm?

What if Bobby Petrino still cared during his second stint?

What if Lamar Jackson had stayed for his senior year?

What if Jeff Brohm agreed to leave Purdue and come home before last season?

What if Jonathan Greenard didn’t transfer to Florida?

Just musing on a hot summer day, with the prospects for pigskin in the autumn diminishing rapidly.