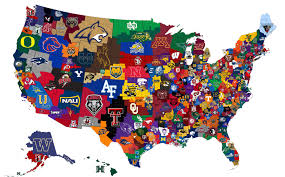 A tip of the cap to Jonathon Swift, whose modest proposal to feed fattened-up Irish street urchins to the rich was meant as satire.

Though, truth be told, the literati of 1729 might not have gotten the joke.

Indications are increasing that one of the pandemic’s casualties might be college sports. Just when our love for such would be a welcomed antidote to our malaise.

So, as admittedly farfetched as it might seem, my suggestion about the upcoming seasons of the two major sports of college athletics is meant to be serious.

Though the chances are improbable that the conference and NCAA muckety muck powers that be will listen to the musings of a scribe who would adopt the nom de plume Seedy K.

I’ll have at it anyhow.

My reasons in no logical order:

I’ve observed how the NBA and The Basketball Tournament and MLS seemed to have made competition viable during this viral uptick. MLB’s first pitch is tonight.

Bubbles are the new normal for ridiculously and obscenely compensated pro athletes.

Why not college hoops, I says to myself?

Which I now present to you, should you be willing to listen.

The various NCAA conferences seem to be moving in the direction of league games only.* So why not have the basketball teams of each league — players and personnel — move to a single place? You know, a bubble.

*Though I’m not sure why scheduling games against prudently protocoled schools within a couple hours drive isn’t feasible.

Where they could isolate. Where they could practice. Where the student athletes could take their classes online, and study. Where games could be played at the times, and on the days the leagues and the various TV networks agree upon.

Make the gathering places neutral. Make them school campuses if possible where there aren’t students on campus.

Say the ACC schools could settle in at Vanderbilt. Or VCU. Or some other geographically desirable locale.

The Big Ten could choose Northern Illinois. Or Indiana State. Or Iowa State.

All involved could be tested regularly. Practice. Play. Study. And provide an anxious nation the college hoops we crave.

The reason I say basketball first is that the sport and number of people involved is far more manageable than football.

The same protocols can be used for the NCAA tournament.* Deep six the First Four, which is like an unnecessary carbuncle in need of scrapping anyway, and each of the sixteen schools in the four regions would gather in one Bubble. Another for the Final Four.

*How Joe Lunardi and the Selection Committee would choose the participants is a whole nother puzzle.

How about Opening Tip, say, October 1?

Save pigskin for later.

Staging battles on the gridiron is far more problematic.

The Wolverine faithful need to understand football is in peril as long as they continue to gather for a quaff or two at Ann Arbor’s The Brown Jug, and the Crimson Tide faithful at the Houndstooth in Tuscaloosa, and the Sooner acolytes at O’Connell’s in Norman.

There’s a correlation between maskless Saturday night gatherings along Bardstown Road, and a vacant Cardinal Stadium for the foreseeable future.

. . . even if we haven’t tamed the virus by or soon after the first of the year, there is some likelihood that we will have quicker and easier tests. Like a saliva test with a result within minutes.

If no vaccine, and there will be one or more hopefully not too long from now, there is word of new medicines on the closer horizon that will help treatment and amelioration of the disease.

And we can still hope that the American populace sooner, rather than later, embraces and adheres to the simple and far from onerous adjustments to daily life that experts universally advise will tame the pandemic.

Which could be by spring, if the country sets its mind to it.

Then there is a possibility for football in March, April and May.

Then, if the whole endeavor falls apart, we’ll at least have that to hold onto and argue about.

I understand there are much more important things to be addressed nowadays than college athletics.

I also know that I, a diehard sports fan, cherished The Basketball Tournament, have watched more EPL soccer than in all of my previous life, and am looking forward to watching the New York Yankees, whom I loathe, play a meaningful baseball game this Thursday night.

The possibility that there’s some unique way to savor college football and basketball, my real loves, holds at bay the inner beast that’s gnawing at my soul.

1 thought on “A Modest Proposal: How to Play the Games”