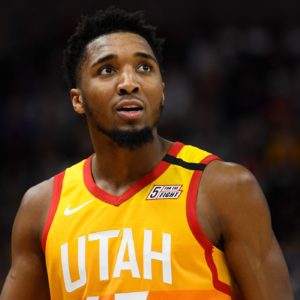 Such was the joy of the battle, a moment to savor frankly all matters considered, I shall begrudgingly accept the bitter denouement.

During a time, when each day seems to bring yet a new stressful situation, both attendant to the pandemic and otherwise, it was a blessing to spend a Monday afternoon watching a live basketball game with a rooting interest.

Normally at this time of year, I’m consuming my Phil Steele, preparing for college football. Which endeavor remains a 50-50 proposition, even for my Louisville Cardinals and the ACC. But I remain hopeful for that.

The flipside is that the NBA has made the bubble work. And the playdowns started on Monday. I don’t especially like the pro game, much different than college hoops, though I appreciate the incredible talent. But really, there are four meaningful games a day during the dog days of August, and I have fallen prey.

Especially when a former Cardinal is front and center in the opening battle.

Especially when the fourth quarter of game eventually to spill over into extra time features a mano a mano, feathers vs. fur battle.

The former Cardinal was forced to play PG for the Jazz, since Mike Conley was out of the bubble, attending the birth of his new baby.

So, all DM did, when the weight of carrying his team rested on his shoulders, was hit 19/33 from the field, including 6 treys, net all 13 of his FTs, grab nine rebounds and dish out 7 assists.

Mitchell’s 57 were the third most ever tallied in an NBA playoff game, behind only Michael Jordan’s 63 and Elgin Baylor’s 61.

He was en fuego, like only two Hall of Famers before him.

But so was former Kentucky Wildcat Jamal Murray, if to a lesser, but winning extent. He finished with 36.

During one three minute segment at crunch time late in the 4th, with the lead changing hands possession by possession, here’s how the two slugged it out.

After Nikola Jokic hit two at the charity stripe, Donovan Mitchell matched him, to send the game to OT, knotted at 115.

The Nuggets were simply steadier in the final five, and pulled away by ten.

Most bitter, truth be told, is that a Mitchell gaffe probably turned the game. Which, being a stand up guy, he owned after the tilt.

In that back and forth, the Jazz had a huge-for-the-situation four point advantage with under 2:00 to play. And had possession of the ball.

But Donovan turned it over when he failed to get the ball into the frontcourt in eight seconds. Murray immediately hit a three.

Playoff basketball at its most telling. Every possession is critical. The slightest miscue . . .

But, it was delightfully calming for an afternoon to be able to forget about everything else going on, and get nervous over the outcome of a basketball game.