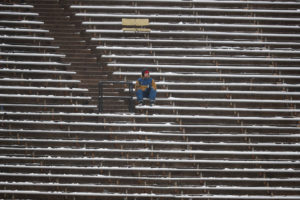 Red Ruffansore was not going to suffer the situation any longer.

Though veterans all of such pre-game preliminaries, his gang in the parking area outside IU’s Memorial Stadium had been trying for almost an hour to get a fire in the grill. To no avail, and to the bemusement of other tailgaters in the immediate vicinity.

Red — his nickname used per his request — looked at his watch. Then gazed toward the stadium, with a look of time and distance calculation in his eyes.

Taking one last glance at the cold grill, then at his companions, Red checked a pocket for his ticket, and, head down eyes forward, headed toward the gridiron with dispatch.

Red Ruffansore does not miss a kickoff of a Louisville Cardinal football game. At least not for four decades. With one exception, which we will address in a moment.

Nor does he miss a play at the end of a game, the extent of which dedication shall also be set forth soon enough.

The above moment from an away game is shared merely to underscore Red Ruffansore’s mindset. He is as faithful a Cardinal football fanatic as anybody.

While Red follows the Cards on the road more than most of even the most dedicated fans, why we are here is to herald his consecutive streak of home games attended. From first whistle to final gun.

For he is the Cal Ripken of Cardinal pigskin lovers.

Red Ruffansore has not missed the entirety of a U of L home pigskin battle since 1979.

OK, that’s not 100% true. He owns that he missed the beginning of one game, when he got caught in a long line, while making a pit stop on the way to his seat. It was a game, he recalls, when “both U of L and the other team scored on the opening kickoffs.”*

*Neither he, nor I, who has but a vague recollection of that, could remember the opponent.

Thanks to America’s premier SID, Kenny Klein, who, if he doesn’t know the answer to a Cardinal question, knows who knows the answer. That person is, of course, silly me, statistical guru Kelly Dickey.

He also stays to the sometimes bitter, sometimes frigid, sometimes sodden end. Regardless of the score.

Like, for classic example, the 1983 Thanksgiving “battle” with rival Memphis State, when the temperature was 28 degrees, and only an announced “crowd” of 9,574 came to the Fairgrounds at all to watch Bob Weber’s penultimate squad lose 7-45.

At some point early in the 4th quarter, Red’s companions bid him adieu.

Which left Red the single fan left on the bleacher side. The usher, who was required to stay in the freezing cold as long as there were any fans in the stands, implored Red to move to the side with a roof.

“It was a football mentality,” says the former offensive lineman on a ’60s St. X state champion. “If I moved, I’d have felt like a traitor to myself and the team.”

So, other than that one game, Red has seen live and in person every minute of 247 consecutive University of Louisville football games.

That’s 14,820 minutes of action. Plus the added time of U of L’s five overtime encounters during the skein. (Three victories, over UK, Florida State, and Cincy, as well as two losses, to UConn and South Florida.)

The Florida State rain game is “by far the most memorable.”

By his side during the entire monsoon that night was his elderly mother, “who didn’t complain a bit.”

Among the other games he mentions as noteworthy, are the Lamar Jackson break out beatdown against the Seminoles, the Texas game during the Schnellenberger era, when Bevo took his leave before the Cards victory was sealed, the Penn State game during Ron Cooper’s regime, when U of L scored first against the #1 Nittany Lions eventually losing hugely, and the Southern Mississippi loss, when Brett Favre threw a long TD pass at the end.

I caught up this week with Red, before the school announced plans to have some fans in the stands.

“Is my streak broken if they play, but don’t allow fans in the stands?”

I offered his record would be secure.

At that juncture, he was not optimistic that a season would in fact come about.

Ah, but now, days later, Red’s on the clock.

He’s received notice that he’ll get his opportunity Friday morning to choose his seats for this out of sorts home campaign.

He’s somewhat more hopeful now that there will actually be Louisville football this autumn.

Such that he was willing to share he’s “extremely excited” about the prospects for the Cardinals.

Especially U of L’s “offensive firepower.”

He remains leery of Louisville’s defense. “We were a leaky sieve last year. I’m afraid teams will do to us what UK did.”

He’s worried about Miami. “That quarterback transfer from Houston is really good.”

He’s worried about Boston College. “The weather could be nasty, slow us down.”

He’s not so concerned about Virginia. “They don’t have much.”

Or, Wake Forest. “Their best player Sage Surratt is sitting out.”

And thinks the Cards will play Notre Dame tougher than people think.

Most of all, he’s pumped that there’s hope for a season.

And that, if there is one, he’ll be in the house from opening kickoff to final horn.

2 thoughts on “Last Card Fan in Stands has Hope”