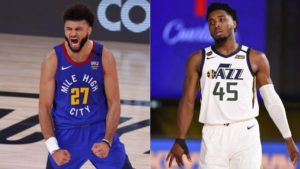 Thanks to the Southeastern Conference decision to play pigskin during the pandemic within the confines of its own confederacy, there will be no Feathers vs. Fur football matchup for the first time since The Schnell, demonstrating his patented stentorian perseverance, willed the annual rivalry.

(My apologies for way too much alliteration in the opening paragraph, even a whole article.)

Yet hope remains that Louisville and Kentucky shall meet on the hardwood somewhere over the rainbow. This season. Fingers crossed.

But there is a fascinating reasonable facsimile — at least a bone (with lots of meat still on it) tossed our way — in what has gone down in the first round Western Division matchup between the absurdly nicknamed Utah Jazz and Denver Nuggets.

The mano a mano smackdown is justifiably the basketball buzz du jour.

The oft mentioned, most revered gold standard of such you take this, no you take this affairs is Larry Bird vs. Dominique Wilkins in Game 7 of the ’88 Eastern Division semi between the Celtics and Hawks.

Brent Musburger did the TV play by play, and at one point during duel, declared, “You are watching what greatness is all about.”

But what the former Card and former Cat have displayed, leading up to Tuesday night’s Game 7, is unprecedented.

Four 50 point outbursts in an entire postseason has never happened before. Mitchell and Murray have that many, evenly divided between ’em in this opening round.

To reiterate what Brent Whatsisname said, this is “what greatness is all about.”

Game 5, a Denver victory saw Murray tally 42, while Mitchell scored but a measly 30.

My fellow hoopaholics, This. Is. Insane.

It’s not exactly the Cardinals vs. the Wildcats on the hardwood, but it ain’t bad.

Actually, it’s epic, and round 7 is coming up.