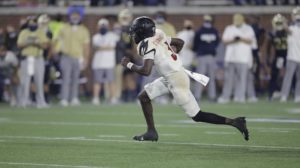 On a night somewhat unique for the American sports landscape, the Will to Win was on display.

Unfortunately for the University of Louisville football team, and its loyal fanbase, it was not to be found along the Cardinal sideline in Wet ‘lanta.

In the American League’s loser-leaves-town Division Series decider, Devil Ray journeyman Mike Brousseau stepped to the plate in the home 8th to face NY fireballer Aroldis Chapman in a 1-1 game.

The last time the two matched up was September 1 when the Yankees’ closer played 101 mph chin music with Tampa’s utility guy, resulting in a bench clearing brouhaha. And suspensions.

Fighting off nine pitches in the “major league at bat,” Brousseau parked the next one for the game winning and series winning run.

The fortitude to dig deep. The Will to Win.

Down 3-1, Miami faced bubble ejection in Game 5 of the out-of-season NBA Finals against the LA LaBrons.

In the final moments of his :47:17, 35 point, 12 rebound, 11 assist, 5 steal masterpiece performance, Miami Heat star Jimmy Butler was so exhausted after being fouled on a drive, he couldn’t stand straight, and was slumped over a railing beyond the endline to summon enough energy to step to the charity stripe.

He netted both FTs. Then two more seconds later, which were the game clinchers, Miami thereby staving off elimination against the highly favored Lakers.

The fortitude to dig deep. To perform beyond any reasonable physical expectations. The Will to Win.

Meanwhile, with 1:32 left before halftime, in a stadium named for iconic GT coach from yesteryear, Bobby Dodd, inventor of option football (“belly series”), the U of L Cardinals had found a rhythm.

M Cunningham, settling in a bit after serially overthrowing receivers early in the inclemency, didn’t lead favored wideout Tutu Atwell too much. Touchdown.

Atwell’s stretched to the max, Bobby Orr-ish horizontal layout was a thing of beauty.

After the Cards’ first of too many fumbles opened the way for Tech to fashion a touchdown lead, Louisville had then tallied 21 straight, grabbing the game by the short and curlies.

Failing to buckle down, to clamp the thing shut, here’s what the Cards surrendered.

Scott Satterfield as much as admitted it was the turning point in Louisville’s discomfiting defeat.

“I thought that was a huge point in the game. Then they get the ball back after halftime.”

The Cards, to be frank, had no toughness of spirit.

That image of Jimmy Butler leaning over a railing, sweat pouring off his brow, grabbing as much air as possible, then closing the deal is the indelible representation of the Heat’s W.

The images I carry from Louisville’s 27-46 giveaway are those matadorian Cardinal defender waves at Tech’s scorers on the victor’s last two TDs.

Not much more here I care to say about the substance of the game.

So, let’s talk about the announcers.

Both Doc and Smart Guy wanted to, during and after the game.

They were not at their best. The game callers, not my pals.

He was not in the stadium. Thus he couldn’t see the field, only the TV screen. And he didn’t have a spotter to help him ID tacklers, etc. He did what he could, given he was doing play by play from his den.

Andre Ware, normally OK if nothing exceptional behind the mic, was also not in the stadium. Therefore similarly at a disadvantage.

But he had one serious lapse, exposings why he isn’t top tier. He made a mistake many national announcers too often are guilty of. Providing incorrect info, because they didn’t do their homework.

For its second TD, U of L went for it, instead of kicking a FG, on a 4th & Goal at the GT two. Trying to explain why the Cards didn’t kick, Ware confused Louisville’s punting issues with Logan Lupo, with U of L’s placekicking. Which has a been a solid, steady pleasure this campaign, with James Turner.

Do your assignments, dude.

Eric Wood was present on the sidelines. Thus was able to provide more significant insight into what was actually happening. He offered more than a few acute observations, explaining the action on the field.

He did make me chuckle during the 2d Q.

Renato Brown, flagged for unsportsmanlike conduct, was pulled from the game and was getting reamed out on the bench. Benetti threw it to long time OL Wood to share how that feels.

The former Cardinal, long time Buffalo Bill immediately invoked the name of a recent U of L coach.

Wood’s an up and comer.

Like Andy Reid, Scott Satterfield was smart to wear a plastic shield to cover his face instead of a face mask.

I don’t understand why all the coaches don’t do this???

All I ask from the Cards in South Bend: Show some fight.