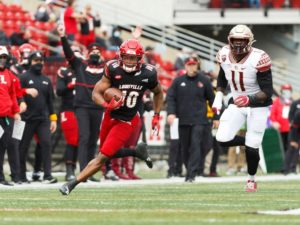 Raise your hand if you saw this coming?

Liar, liar, pants on fire, everyone of youse.

“We told them last night and in the Friday night meeting that we thought we had a great opportunity today to explode as a football team.”

The Louisville coaching staff knew what issues needed to be addressed earlier in the week.

Coach Satt, in the opening statement of his weekly press conference: “We only ran 45 plays (against Notre Dame) on the day and within those not many big plays. We have got to get more big plays and that has been an issue all year. We have got to do better with that.”

Cardinal Drive #1. 3d & 8 at the U of L 25. M Cunningham 66 yards to Tutu Atwell. Which leads to a 9 yard Javian Hawkins TD scamper, the first of scores on five consecutive drives, all set up by chunk plays.

Cardinal Drive #3. 1st & 10 at the Florida State 48. Back to pass, Cunningham is pressured, his receivers are covered, so he eludes a sack then scrambles to his left for 35 yards. Which leads to a 14 yard TD toss to Ean Pfeiffer.

Cardinal Drive #4. 2d. & 24 at the Louisville 42. Cunningham fires a beautiful pass to Atwell, who makes a sure handed snare for a Touchdown.

At which point, the University of Louisville Cardinals had big played their way to a 31-14 lead.

Which was the halftime advantage. The visitors came no closer the rest of the afternoon.

U of L had chunkplayed its way to cruise control.

Scott Satterfield, a man of vision, a man of his word.

Let it be said. Let it be done.

Coach Satt in the opening statement of his weekly press conference:

“Defensively we played a good game holding Notre Dame to 12 points. It was an outstanding effort by our guys on that side of the ball, particularly in the red zone, holding them out of the endzone on multiple occasions. The negative was third downs, we gave up too many third down conversions and were not able to get off the field, particularly on that last drive.”

On FSU’s too easy first possession, Louisville’s D gave up two 3d down conversions, allowing the Seminoles to take a disturbing touchdown lead.

On FSU’s other touchdown drive, the Cards surrendered three 3d down conversions. And, after a 3d down stop, a 4th down conversion, which went for the score.

Coach Satt, he knows of which he speaks.

Ah, but the rest of the brisk gray football in the fall afternoon, Cardinal defenders did the tighten up, allowing the Seminoles to convert only 2 of their other 12 3d down attempts. And no more 4th down conversions.

So, how did those former future U of L Cardinal QB stars fare, the fellows now calling signals for Florida State?

After a couple so so efforts in a row, M Cunningham was 12/13 in the air for 233 yards and two touchdowns.

In the first half.

For the game, Call Me Malik was 16/24, adding 45 more yards after intermission.

16 carries. 174 yards. 10.9 ypc. Three touchdowns. Ten self-inflicted knuckle pushups after a no harm fumble, which was recovered by the Cards.

James Turner was again steady, missing a FG attempt from 52, but making two other FGs and all those Points After.

On those two made FGs, U of L did something I cannot remember seeing before. Though I have to assume I have, that it’s simply my faulty memory.

For a better angle, when the ball was on a hash, Turner did not line up directly behind the snapper, but on a diagonal, more to the center of the gridiron.

Such is the mediocrity of Louisville’s punting game, the Cards teed it off after suffering the safety, instead of punting as is the norm.

Louisville surrendered only one sack. Which came on the safety, when backup RB Maurice Burkley simply ran past the tackler Emmett Rice without blocking him.

It would have been nice if Puma Pass’s “lateral” to Tutu Atwell on the last score would have registered as a forward pass, thus a TD pass.